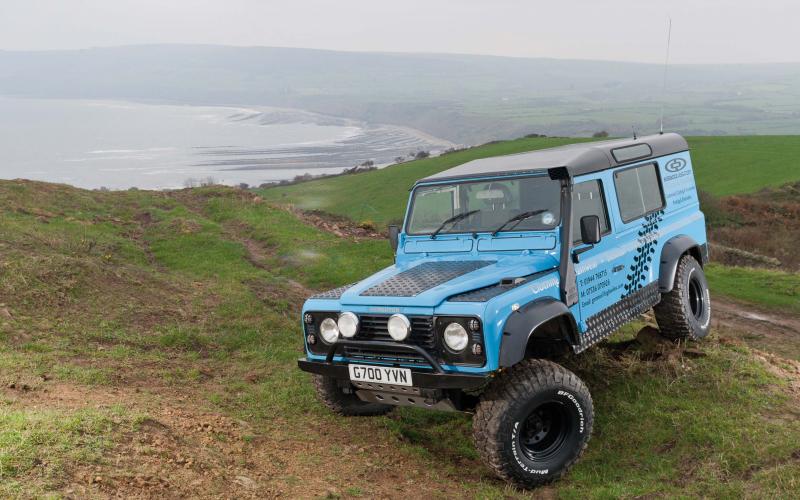 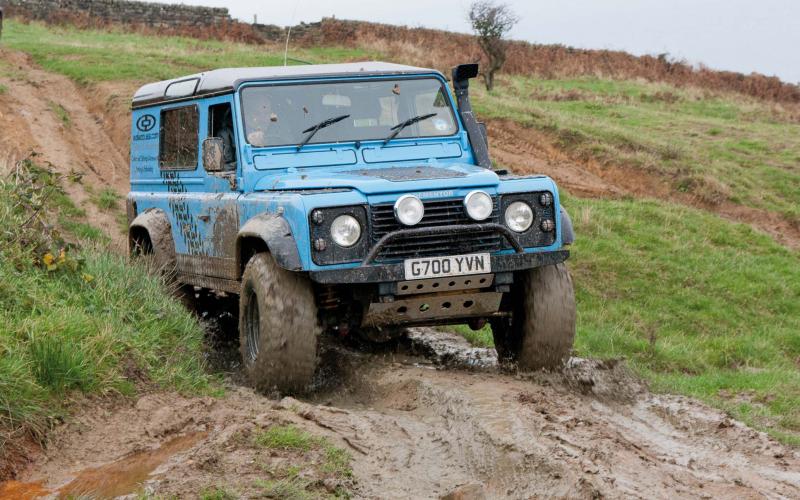 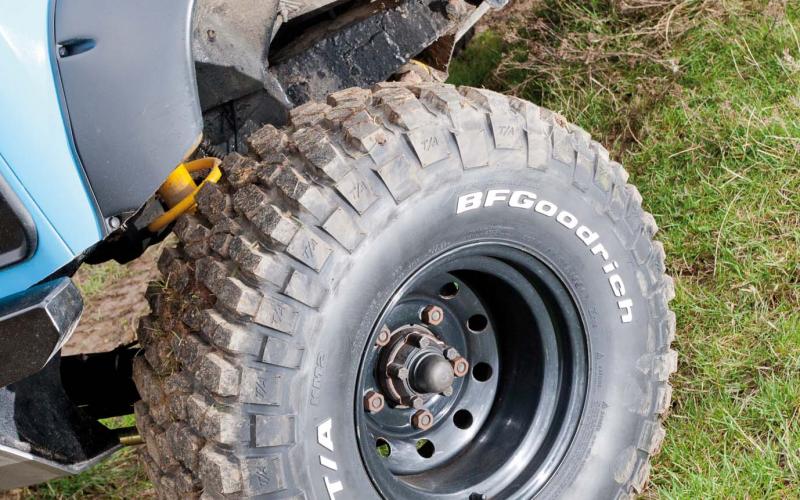 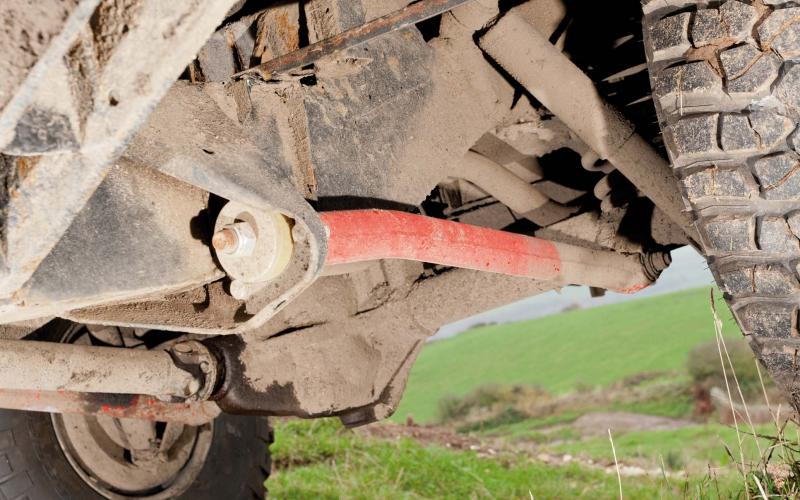 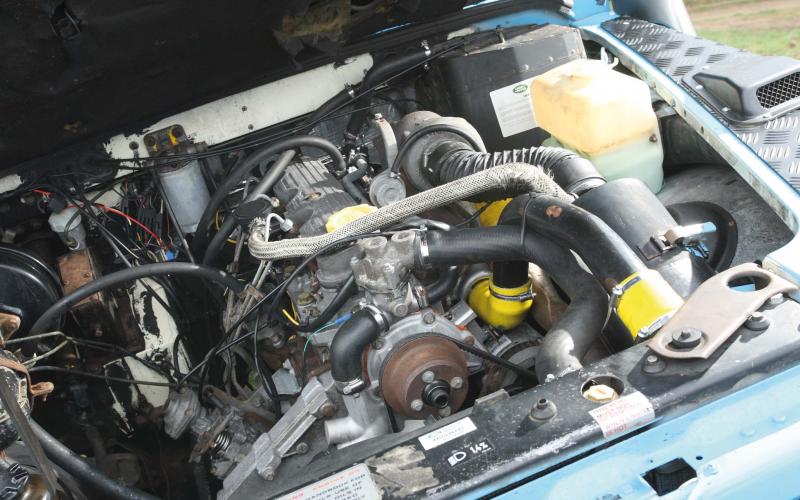 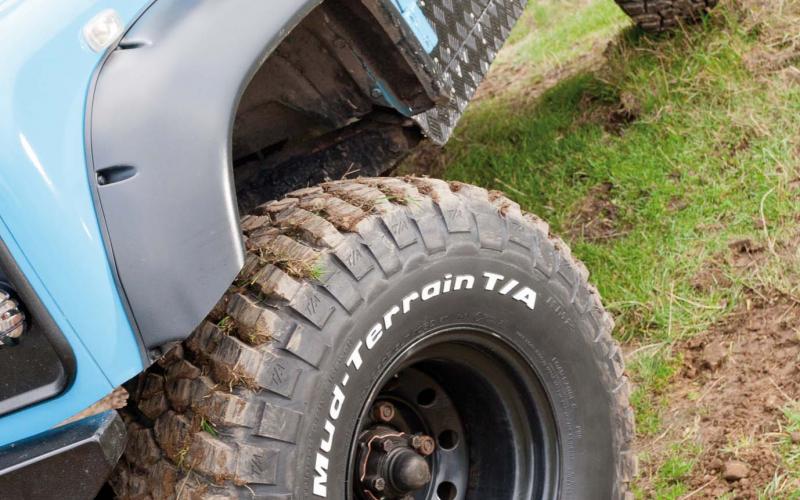 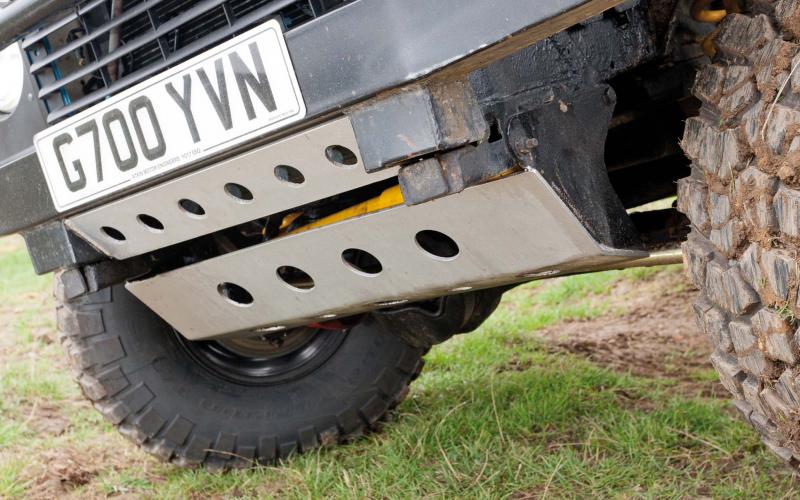 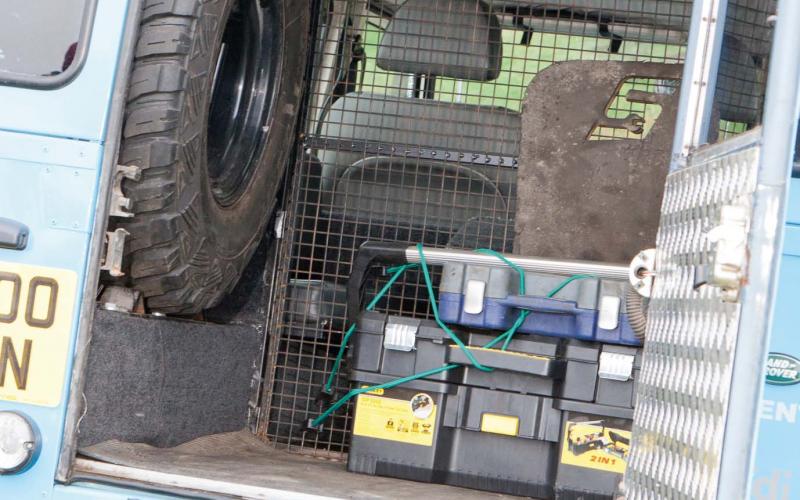 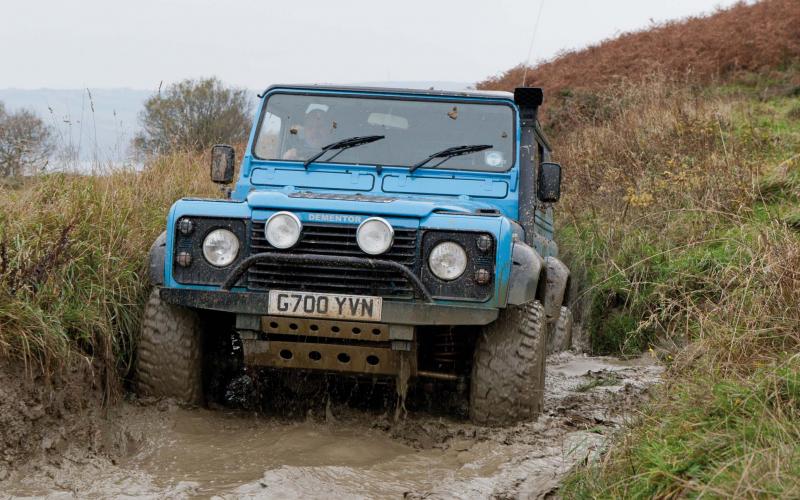 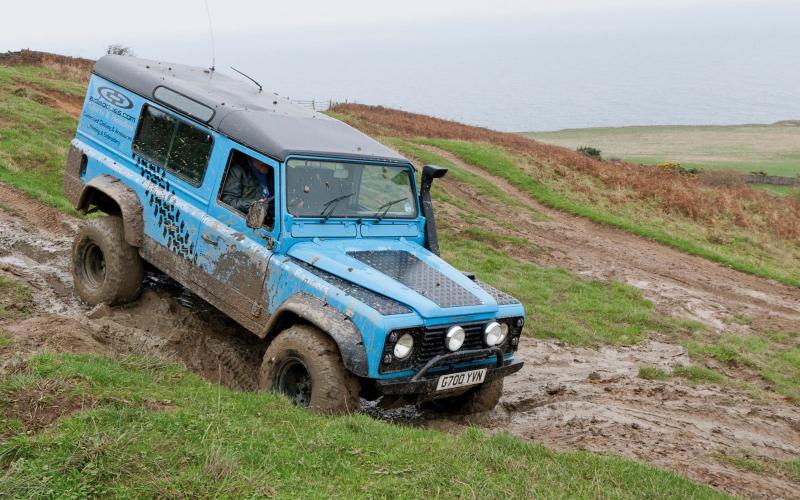 Agricultural engineer Nick Mills is one of those people who always needs to have a project on the go. For his latest creation, an ex-utility Defender 110 provided the blank canvas for what an art critic would surely call his blue period.

When it comes to building 4x4s, even those who like to do the spannering themselves always have some sidekicks they want to thank. These people normally have nicknames like Big Bob or Knuckles, and that’s just the wives. So it makes a refreshing change to see someone like Lord Middleton of Birdsall Estate in the list of people who need to be thanked.

Nick Mills also, and more traditionally, wanted to thank his wife Gemma, but we know about her don’t we? She figured in the March issue in her very own sorted Suzuki Jimny, and she’s also the first user, as far as we’re aware, of the word ‘boolies’. For those who missed the article, this word refers to big alloys or wheels, and Big Boolies is also the name of Nick and Gemma’s T-shirt printing and embroidery business.

That business means they need a tow tug for taking their trailer to car shows and 4x4 events, where they can print clothing and stickers for enthusiasts. You can see where this is going, in a cart before the horse kind of way.

But, despite both Nick and Gemma being total 4x4 nuts and despite their familiarity with registering vehicles to themselves, Nick has one which has to not only tow the trailer to events, it also has to get him to work every day. And it’s not as if he works in an office and leaves it on a tarmac car park all day.

Although Nick helps Gemma out with Big Boolies, he’s also an agricultural engineer from Monday to Friday. His job entails working with Land Rovers every day – some people’s idea of heaven, or hell. There are 14 of them on the local farming estate and Nick keeps them all on (and off) the road. As well as mechanical maintenance he also does any engineering or fabrication work on the estate so he’s hardly overstating it when he describes himself as ‘an all-round chap, I am.’

This all-round chappy really likes to have a project on the go so, after a string of vehicles that reads like a list that’s as long as, well, a piece of string, he chose a Land Rover. Unless you’re having this feature read out to you by someone speaking clearly and slowly, you would have known this already of course because you would, naturally, have had a sneaky peaky at the pictures. And they’re all distinctly blue.

Nick likes brightly coloured vehicles. The predecessor to this 110 was a Discovery called Kermit. You may have already deduced that it was called that because it was lime green. This time, like Matisse, Nick is clearly going through a blue period.

But why a Land Rover in the first place, given he has to work on them every day anyway? ‘I love Land Rovers and always have,’ is the reasonable reply. ‘I wanted to buy a Defender 110 as I’d never owned one. I’ve had a 90 before but didn’t like the lack of space in it, what with having two children and a dog to fit in.’ (Note that ‘wife’ is not included in the list.)

The 110 he found suited his artistic temperament: ‘It was exactly the type of Land Rover I was looking for, a blank canvas for me to build on, to whatever spec I wanted.’ And of course it had plenty of bodywork to be painted blue. But the bodywork, like everything else, was in pretty poor condition, and Nick had a theory about that.

‘I have my suspicions that it was originally an old Electricity Board vehicle, as when I bought it, it had the large roof rack you see on those, and there were other bits to give me cause for suspicion. The chassis was rotten and the bodywork was really rough and neglected. The interior was also really tatty and a 200Tdi had been fitted very roughly indeed!’

Sounds perfect. He ran it for a few weeks until the MOT expired and then signed it off on SORN while he got down to work. First off he stripped it all down in his work workshops, and sold the bits he didn’t need so that he could fund the bits that he did.

With it all stripped down, he shot-blasted the chassis, repaired the main rails and fitted a new rear quarter-chassis and outriggers. On the body front, he knocked out all the dents, did all that other boring stuff you do to prepare the body and then resprayed the lot in the colour you see here which, for the interior designers out there, is called Ransome Orwell Blue. As he correctly states: ‘Paint jobs are bright in this household!’

The body also received a cage in the rear, which Nick fabricated himself. While he was in there he fitted stuff from all over the place. The half-leather front seats are from a Rover MG ZT while the rear heater came off a Ford Transit and the rear bench seats were from Britpart. Quite a lot else was home-made, including the centre console complete with cubby box, cup holders and CD player housing. Well there’s no point in roughing it off-road is there?

Outside, most of the effort went into ensuring that the wheels could be wider and have plenty of room to bounce up and down. The front wings were trimmed, the wheelarches were cut back and 4” Britpart extra-wide arches went on. Under there went 10x15” modular steel wheels shod with 33x12.50R15 BFG KM2s. Nick really rates these for the countryside life and lifestyle he has. They offer plenty of stability on the slopes, which frequently become side slopes, that he encounters, not only on pay and play days but also in his daily work.

Even so, this wouldn’t be a terrific set-up without some control over the wheels’ wayward wanderings, so Nick decided to add some suspension. And with 33-inch tyres, of course, that had to be lifted suspension. Step forward Britpart, with a 2” lift kit finished in its trademark yellow – this of course gives us the colour palette of blue and yellow, which are the classic signature colours of the South of France where Matisse painted. Nick really has thought this through, very sophisticated.

One area where we do have a bit of a colour clash is with the home-made cranked rear arms. These bring a touch of carrot to proceedings, although they do look rather stronger than anything Peter Rabbit would want to get his teeth into. The steering package is equally strong, with heavy-duty steering arms and a Britpart heavy-duty steering damper.

Axles and propshafts are all original, with a 200Tdi gearbox and transfer case. The engine is still the unit which Nick took exception to in the way it had been rammed into place, but he’s had a bit of a go at it in the workshop. He had to replace or repair the starter motor, head gasket, alternator and water pump before he actually moved on from the basics. He then fitted a large-core radiator, heavy-duty clutch, TD5 heater and an electric fan that came off a Fiat Ducato van. After a good service it was running sweetly, purring with happiness and waving its new MOT certificate at the world.

But what do you do when your project is basically finished and you’re able to simply use the thing exactly how you envisaged, with it taking you comfortably to work every day and allowing you plenty of playtime with family and friends off-road at the weekend? Are you in fact extremely happy and content that your vision has come to fruition? No, of course you’re not.

Instead you’re restless for the next thing. And that has to be a 4x4 in Nick’s case, as he explains: ‘I’ve had a lot of 4x4s and fast cars too, too many to mention, I’ve had Cosworths and Subarus, and I’ve now got a Nissan 200SX drift car. But if I had to choose between a super-fast car or a 4x4 the 4x4 would win hands down. We will always enjoy a good day out with the kids and friends, messing about and having a laugh in the mud.

‘But I do have a serious problem. When a project is finished I start to get itchy feet and need to fuel my addiction for the build buzz. I’ve got big plans for the next one, which is already under a tarpaulin in the yard – a 110 County V8 Station Wagon. Watch this space!’

Strange. It should be a happy ending, but instead this tale simply highlights how restless we are for the next big thing. But, just for a moment, let’s all enjoy this project, finished and working properly. And let’s not forget to thank, as Nick does, Lord Middleton of Birdsall Estate who so kindly let him use the workshop and garage facilities there to such great effect. Friends in high places, you see. No wonder this Matisse-like Land Rover is such a work of art.

Nick has friends in high places, and so do we. On top of the cliffs above Robin Hood’s Bay, to be precise, which is where you’ll find the venue for our photos at North Yorkshire Off Road Centre. They’ve been teaching off-road driving there since 1978, and you can go for a play most days for £25 per vehicle. Contact them on 01947 880371 or visit www.nyoffroad.co.uk.