Vehicles > Land Rover > My Other Car's a Land Rover

My Other Car's a Land Rover 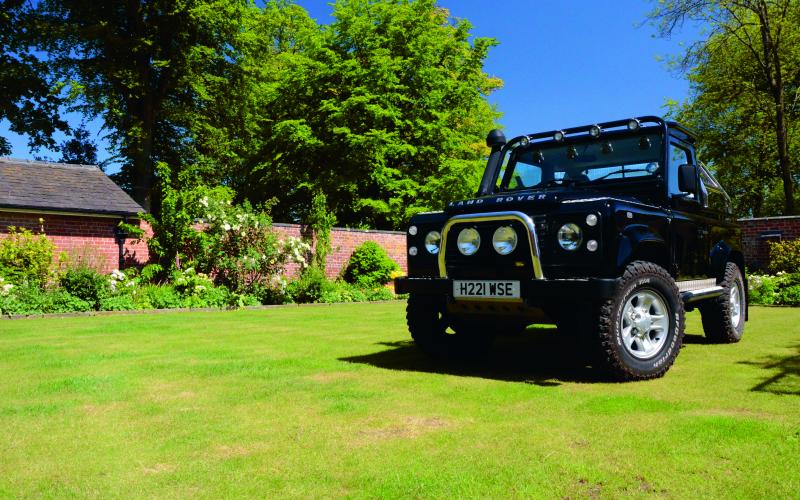 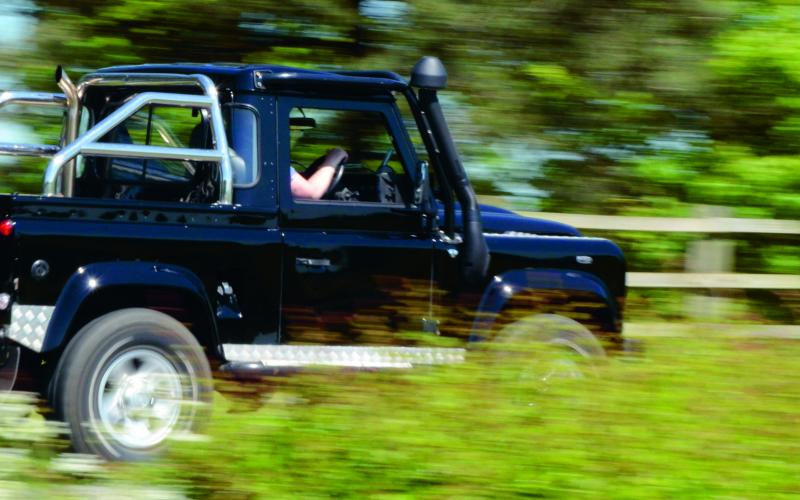 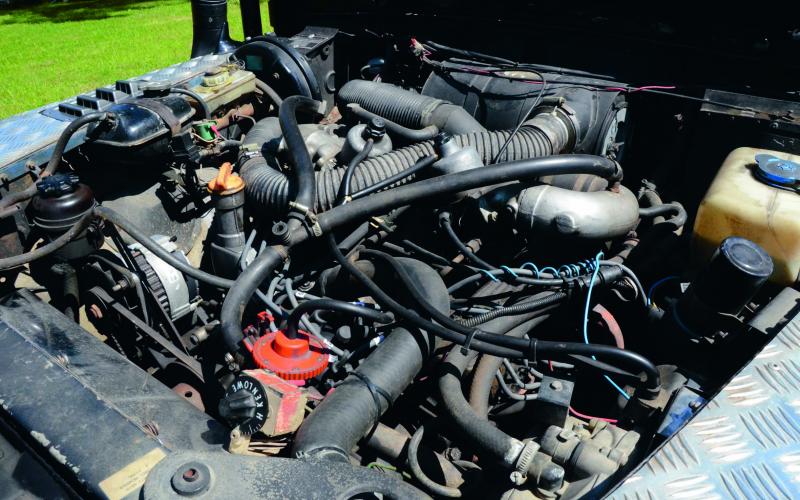 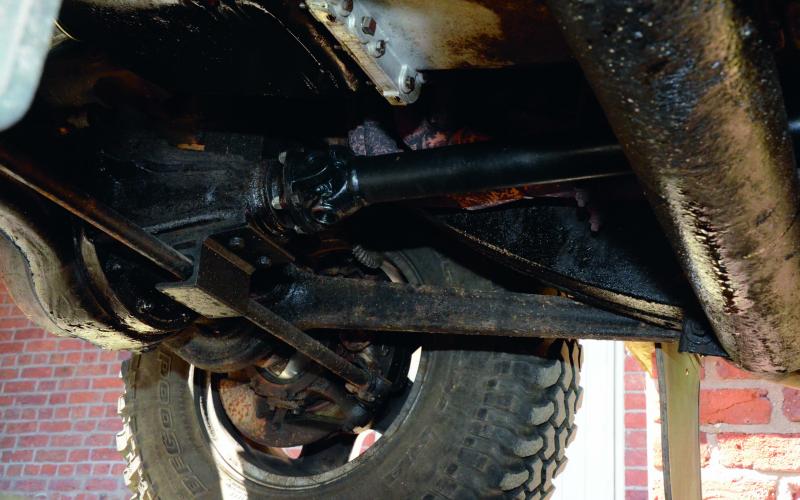 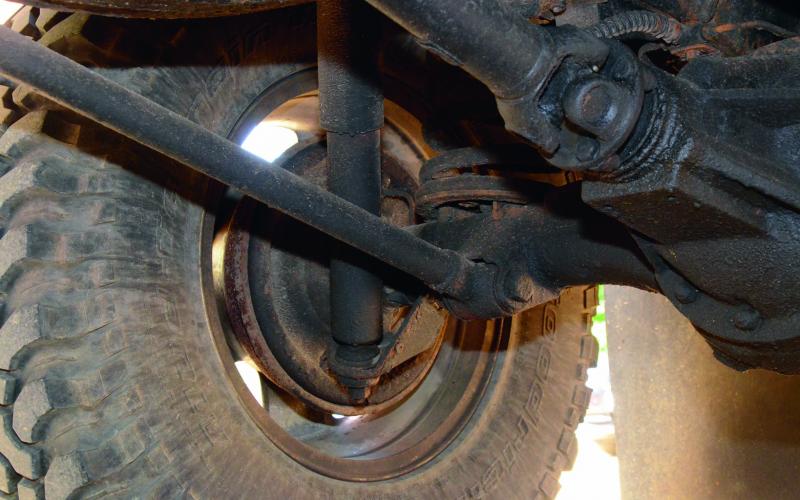 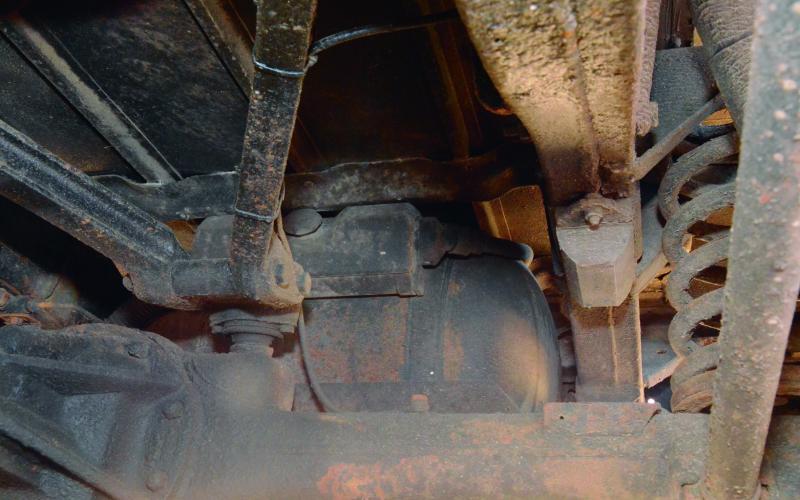 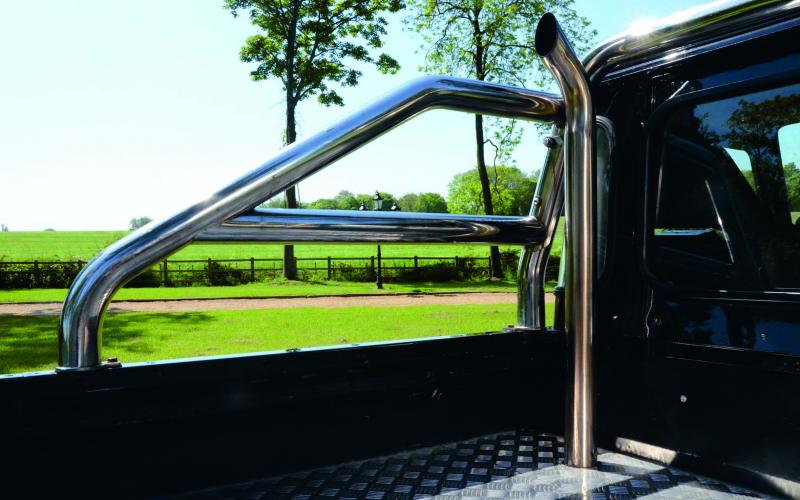 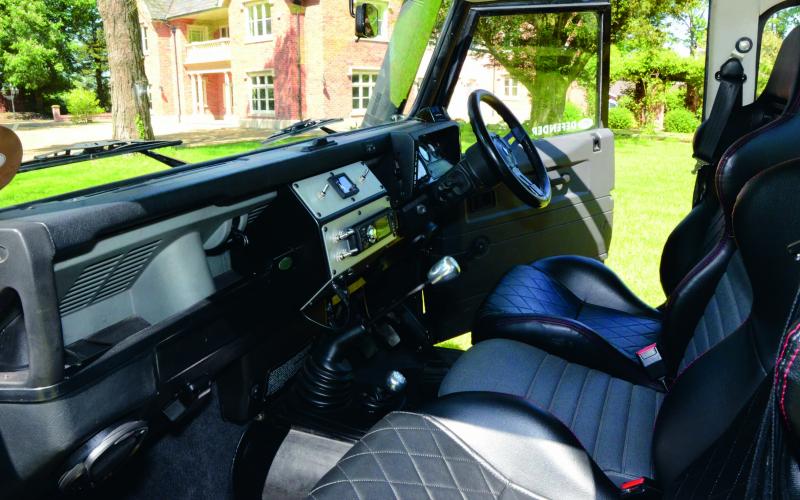 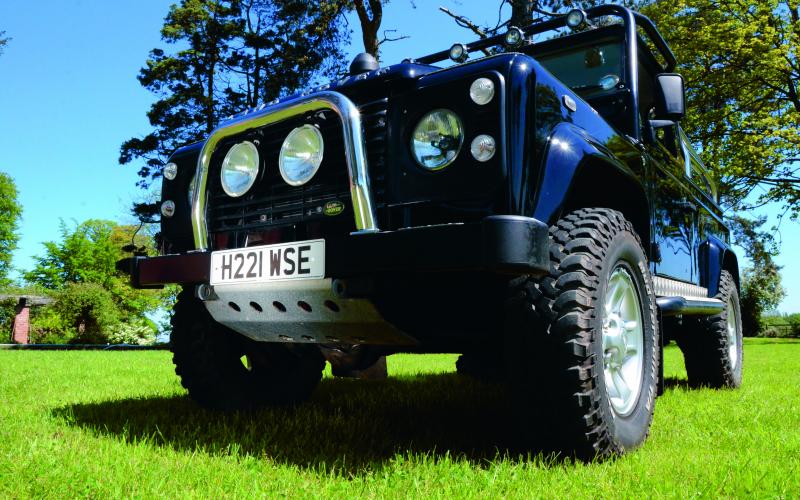 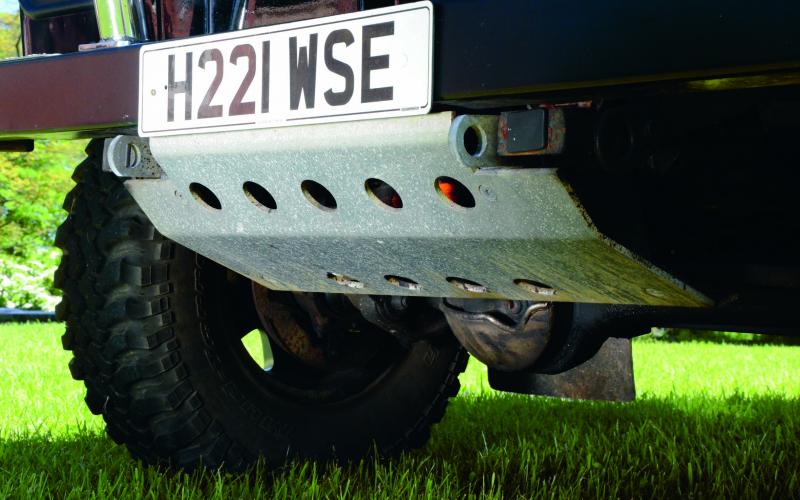 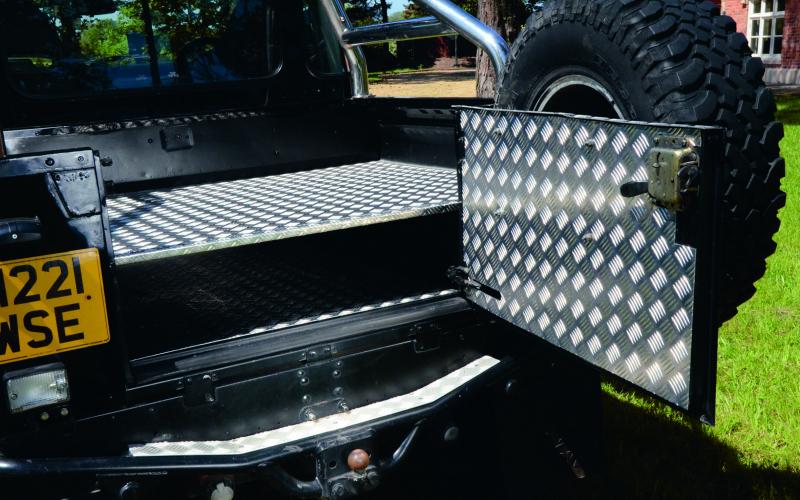 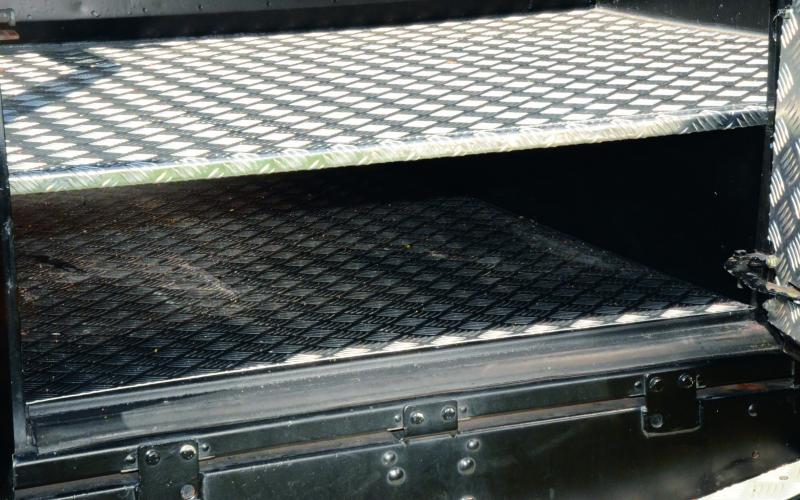 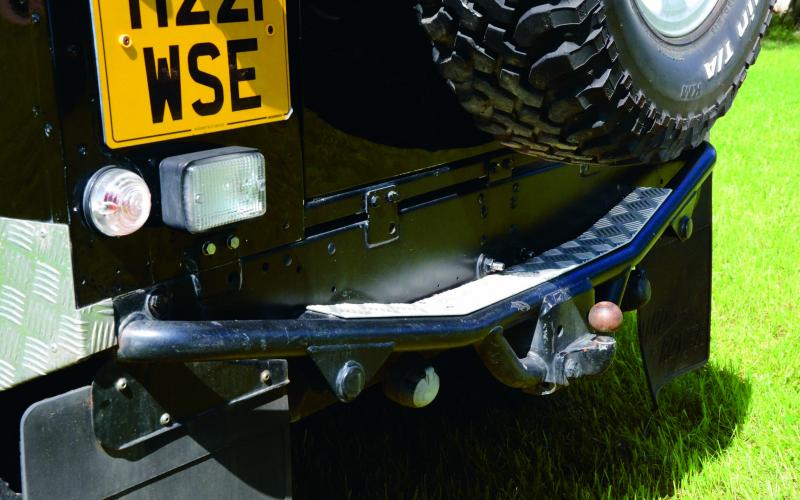 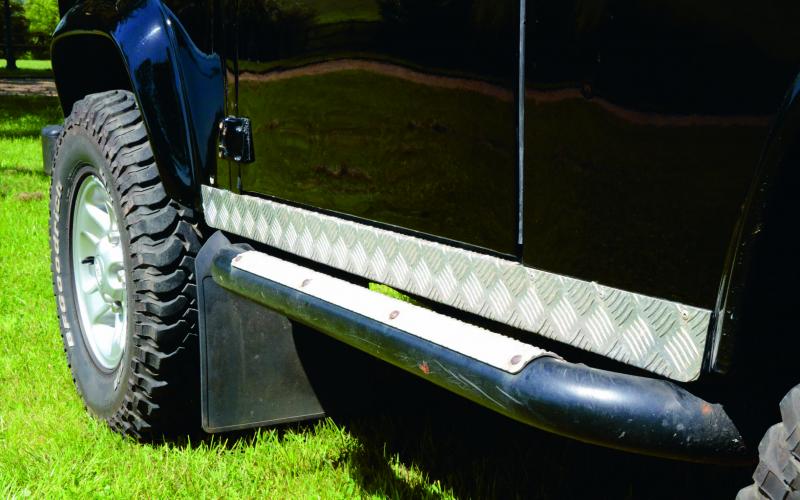 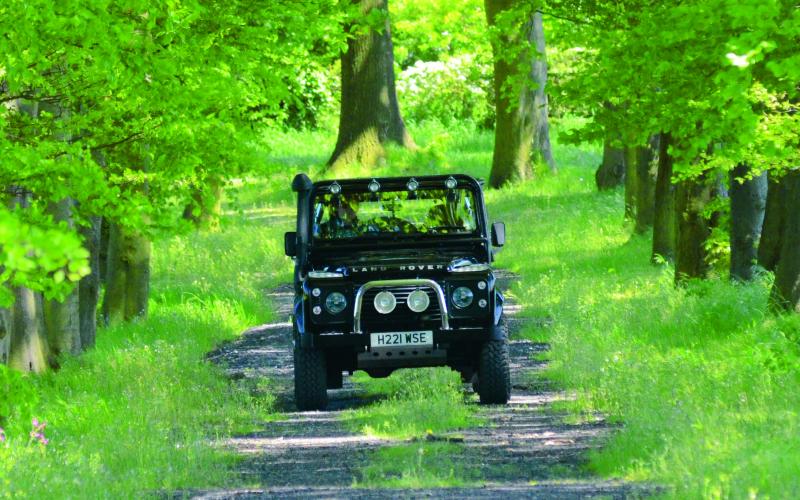 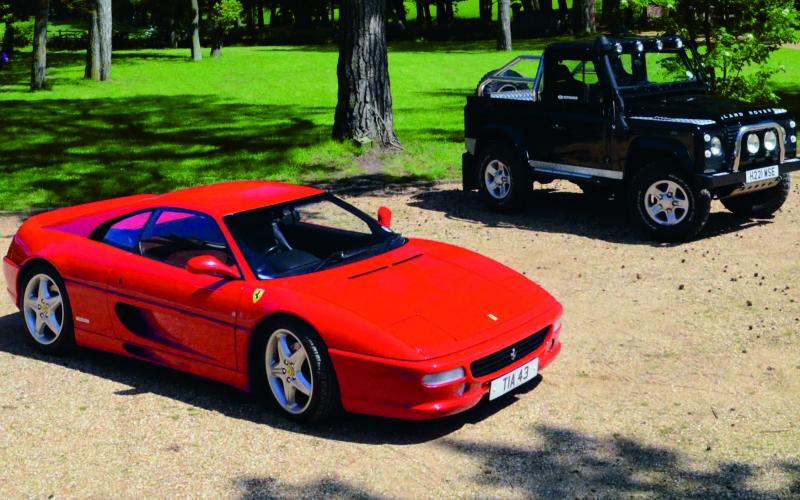 You know those old stickers that used to say ‘my other car’s a Porsche’? Well, John Duerden don’t need no Porsche, cos he’s got a Ferrari. But it’s his other car that’s the interesting one…

For most people, it’s enough to have one 3.5-litre V8-powered vehicle in your life. John Duerden, however, is not most people. When it comes to V8 cars of your dreams, he doesn’t have one. He has two.

They couldn’t be more different. One of them’s a Ferrari F355. Yawn, huh? The other one, and this article was bound to get interesting at some point, is a Defender. And a Defender of some note, too; with a straight-through exhaust exiting behind the cab via a vertical stainless steel stack, it would struggle to be anything else.

It’s fair to say that in John’s hands, the 90 has become a bit of a looker. But it wasn’t always like that. He’s the third owner since it began its transformation from a tired old farm truck; each has played their own role in turning it into the eye-catcher it is today, but the guys who kicked it all off were as willing to rag it in quarries as cruise it around town. The evidence is there to see on YouTube, in fact, where the newly fitted V8’s hillclimbing ability is on show for all to see.

Newly fitted, yes. Despite dating from the era when the V8 was still on Land Rover’s price list as part of the Defender’s engine line-up, John’s truck started out as a 2.5 diesel. The engine meanwhile started its life in a Range Rover and was adapted to slide in beneath the 90’s bonnet, where it mates to the original LT77 gearbox and LT230 transfer case. It was also converted to run on LPG, which is something you’d only do to a Ferrari if you wanted a mob of classic car enthusiasts to turn up at your house with burning crosses in their hands.

Downstream of here, a set of new propshafts in standard spec mate to the original Land Rover axles. The word ‘original’ is getting used a lot here, and in this case it means the vehicle has the old-style drum-braked rear as well as two-pin diffs, as opposed to the four-pin units that would have used on a factory-spec V8.

That didn’t stop John from dressing the hubs with a set of 16” Boost alloys and 265/75R16 BFGoodrich Mud-Terrains, however. These go with a cheerfully lavish metallic black paint scheme to make it instantly obvious that this is not your everyday 90 – as if the chrome styling bar battling for attention with that stainless steel chimney could have left you in any doubt of that.

There’s a lot about the vehicle that’s there to look pretty, but that doesn’t stop it being as practical as any other short-wheelbase truck-cab. More so, in fact, thanks to a nifty loadspace cover John made up himself by folding chequer plate around a sheet of ply, creating a false floor that protects the cargo beneath by keeping it out of sight and out of mind. The materials cost ‘a few quid’ (he might trade shares for a living, but he’s from a farming background) and the effect is as good as you’d get from a proprietary product costing hundreds.

The most awkward part of the job was correctly positioning a hole in the cover to fit snugly around the exhaust stack. Sounds easy, but think about how you’d actually go about doing it and you may well get a headache. Having got round that and dropped the finished sheet into place, where it sits on the wheel boxes, a bead of silicon sealant all round the edge keeps the compartment below it from turning into a dank cave with a mouldy roof.

The visual effect, which relies a lot on you liking the look of ally plate, is finished off by a similarly clad tubular bumper extension on the rear crossmember. There’s more of the same beneath the standard-fit sills – ‘beneath,’ rather than ‘instead of,’ because the originals are retained (clad, naturally, in chequer plate).

There’s yet more of the stuff on top of the original-style front bumper, which is also home to a tubular A-bar in eyeball-searing stainless steel. Evidence of the vehicle’s off-road past comes in the shape of heavy-duty diff and steering guards, then up on top of the front wings you’ll find, who’d have thunk it, chequer-plate protectors. These house a pair of KBX Hi-Force vents for the heater intake, adding further to the street machine image.

So too, in a very Land Rover sort of way, does the external roll cage. Unless you’re a comp safari scrutineer, in which case it would give you a fit. It’s only attached to the body (the front wings just ahead of the bulkhead, and the rear of the roof) so although it might well save your life if you go over slowly, it’s not going to keep the vehicle up in a mighty one. It’ll help protect the cab from trees, though, given the chance, and far more to the point it provides the perfect mount for a set of four LED spotlights. These have integral ring-shaped daytime running lights and could therefore be expected to have cost an arm and a leg, but by the wonders of Amazon John paid a tastily modest forty quid for the lot.

Closer inspection reveals that the lights haven’t actually been wired up yet, which is because it’s one of those jobs John’s mate has promised to do but never quite got round to. But the Mantec snorkel next to the right A-post is safely plumbed to the airbox, so if John were somehow to be able to get into water that deep without his HT system waving the white flag, his engine would at least live to fight another day.

Not that he’s interested in that kind of carry on, at least not behind the wheel of a truck he loves for the amount of attention it gets (all of it positive, which is something we doubt he can say about that Ferrari). He’s no stranger to the world of lairy off-road antics, however, having owned a V8 Lightweight as his first car at the age of 17.

The phrase ‘V8 Lightweight’ can evoke images of crude brutality, but this one wasn’t just your average zero-frills RTV smoker. It was bright red and had chrome exhausts running down its sills, Cobra-style. It was, John admits with an element of understatement, ‘quite a lairy sort of vehicle.’

Not that he didn’t use it the way a V8 Lightweight, or any Lightweight short of a concours winner for that matter, begs to be used. ‘Safety wasn’t a big thing back then. I used to take the doors off it, fold the windscreen down… I did almost roll it once or twice, but we didn’t care about that sort of thing in those days, did we?’

Having somehow managed to remain alive for the intervening two decades, owning a couple of standard farm-hack 110s in the process, he found himself coming back to Landies when, after five years of living in Manchester, he returned to the countryside. ‘I’d only had one car parking space in town. But then we moved back to the country and I wanted a runaround, and I thought the best thing for that is a Land Rover. That’s when I happened to find this one.’

As we’ve already established, he’s not been slow to stamp his own mark on what was already a very distinctive truck. His most recent addition was a pair of brand new Recaros, and further groovy gear in the cabin includes a sports steering wheel and a Raptor Engineering centre console, in which sits a DVD stereo with Bluetooth and iPhone dock. As we were sat in the passenger’s seat chatting with John about the Landy, his phone was there on the top of the dash displaying real-time movements in stock market prices.

This, then, isn’t your average story about a man from farming stock who’s rebuilt a 90 for his everyday car. It’s the tale of someone who loves his toys and, having found a Land Rover that was well down the road to being just what he wanted, was ready to roll up his sleeves and take it the rest of the way.

But, like so many tales of a man in love with his Landies, it’s a story with a twist. Because a couple of weeks after we saw his 90, he sold it.

Why? Well for one thing, he turned a handsome profit on it, which being from farming stock is in his blood (he reckons he doubled his money on that Lightweight, so he started early). More to the point, though, he’s just become a dad, and though truck-cab 90s have many talents, transporting a growing family isn’t among them.

Which leaves him as a man who, perish the thought, only has a Ferrari. Or not. Because now he’s got used to having a Land Rover in his life again, guess what he’s after now? Yes of course.

‘I think I’ve found one that needs doing up. It’s a 2.5 diesel from 1987, but this time it’s a County, so it’s a bit more family friendly. I think I may buy that and tinker again.’

What would the tinkering involve this time? ‘I’ve got some ideas in my mind,’ he laughs. A friend’s lent me a Mini Cooper which has a chrome wrap, and I’m thinking of doing that. I’ve never seen it on a Defender.’

There are those reading this who’ll have just spilt their real ale in horror at that suggestion. And you can safely say that John Duerden isn’t your average Land Rover fan. But when he speaks about what the green oval means to him, it all sounds very familiar.

‘I just think they’re a classic icon. And they’re fun, really. I mean, you could actually name more bad points about a Land Rover than good points – you’ve got to really like them to put up with them!

‘I think it’s a good status symbol,’ he continues. ‘It doesn’t matter what it looks like, you can go anywhere in them, turn up to parties or whatever, and people don’t bother.’

Here’s a man who’s turned up to parties in all manner of eye candy from the likes of Mercedes and BMW, owned a classic MGB Roadster when he was still in his teens and of, course, now has just about the ultimate make-a-statement motor parked in his garage next to the space where the 90 once stood. He clearly likes his fine cars.

‘But I’d always prefer an old 90 to a Range Rover Sport or something like that,’ he concludes. ‘It doesn’t mean it’s a dream car to drive, or it’s well designed or anything. But it’s keeping it real. There’s just nothing like it.’

And that, right there, is why the space next to his Ferrari isn’t going to be empty for long. He’ll always have Landies in his life now, will John. And whatever else they might be, you can bet they’ll never be ordinary.