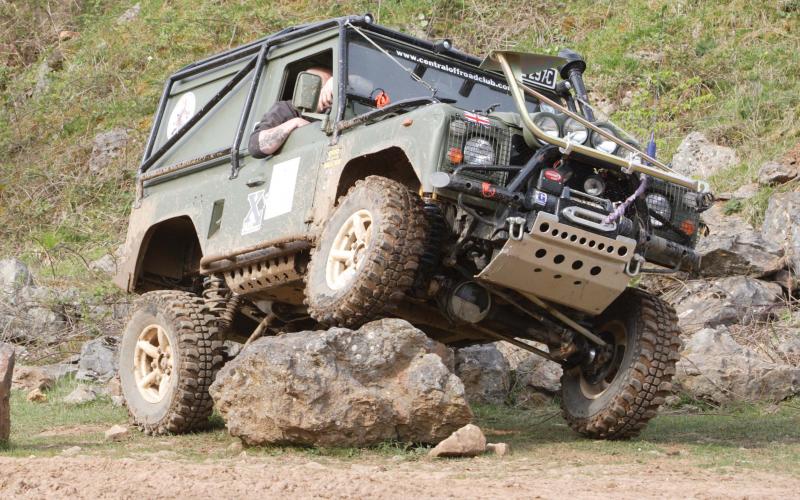 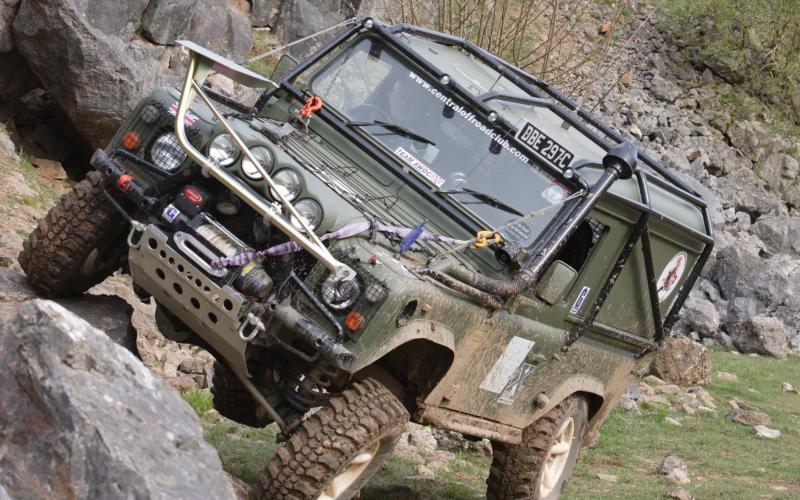 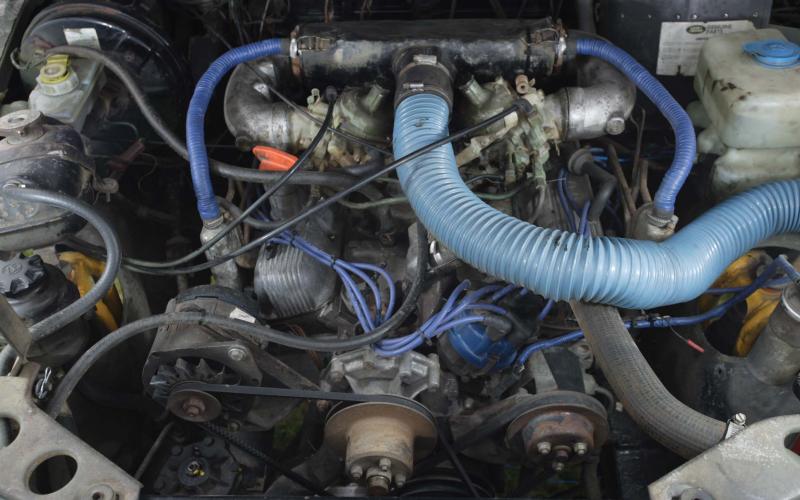 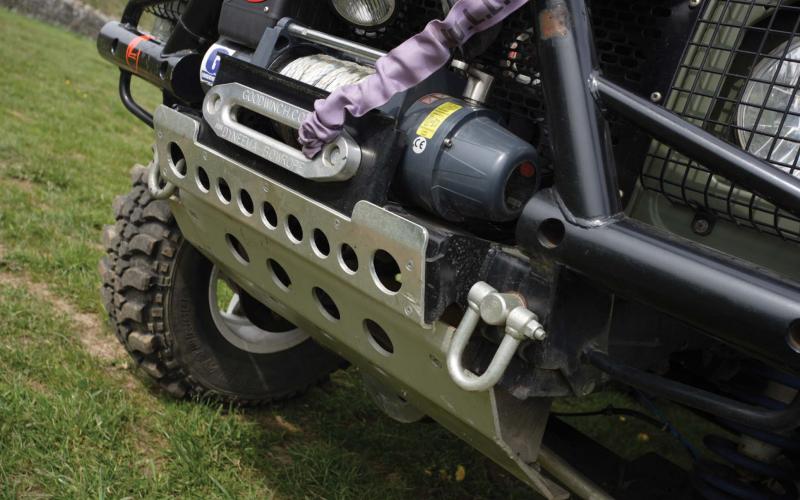 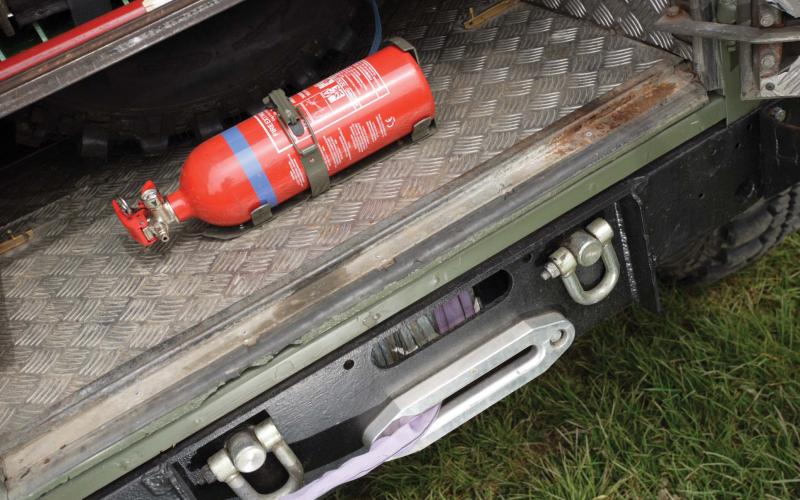 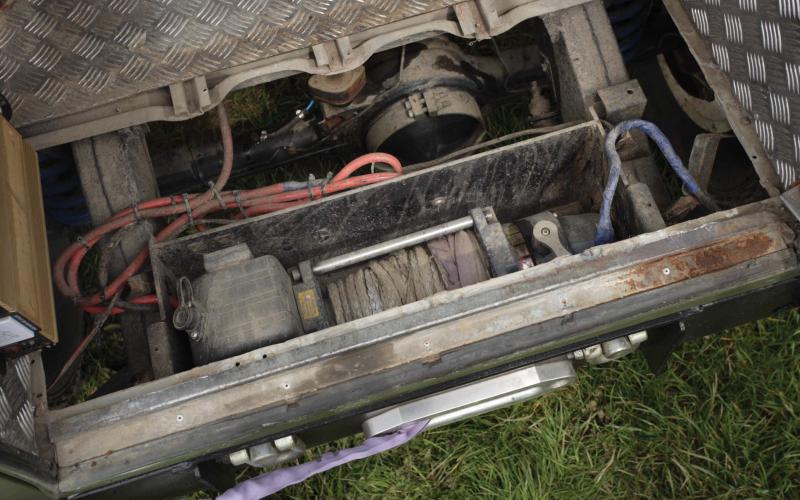 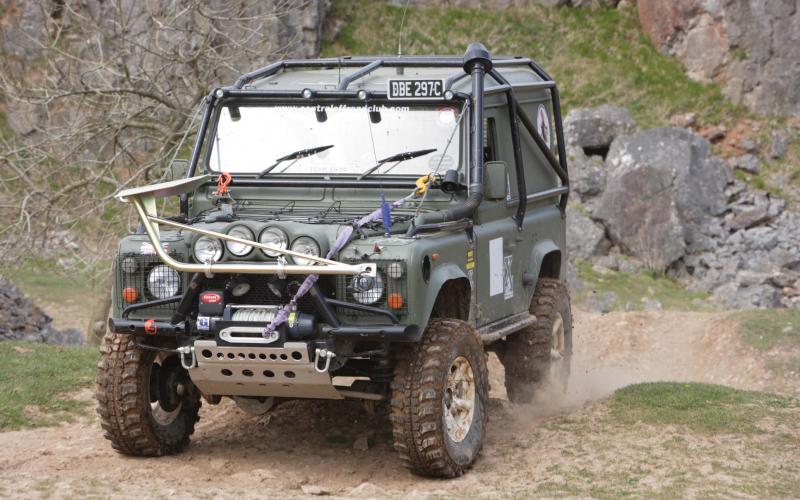 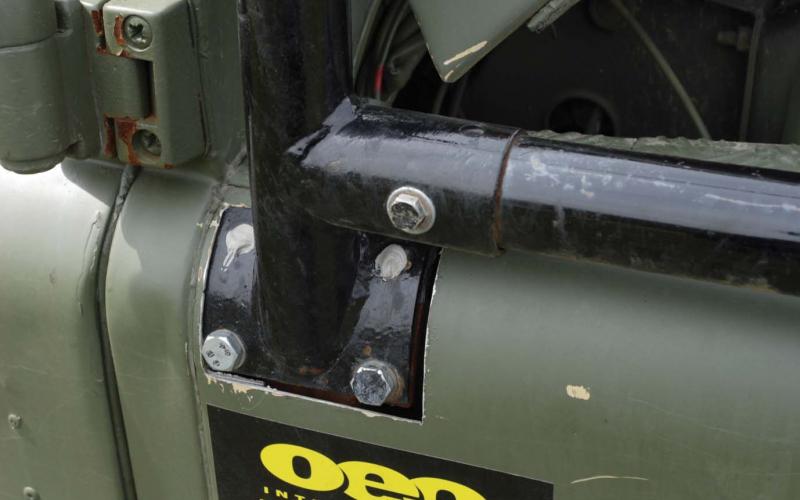 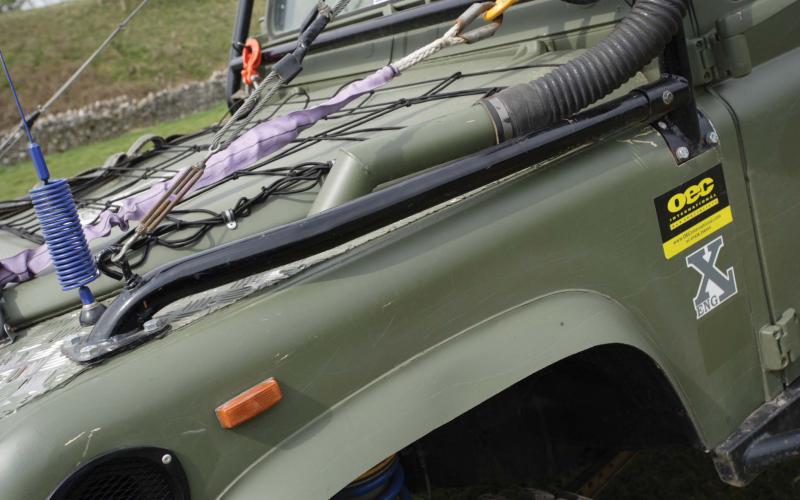 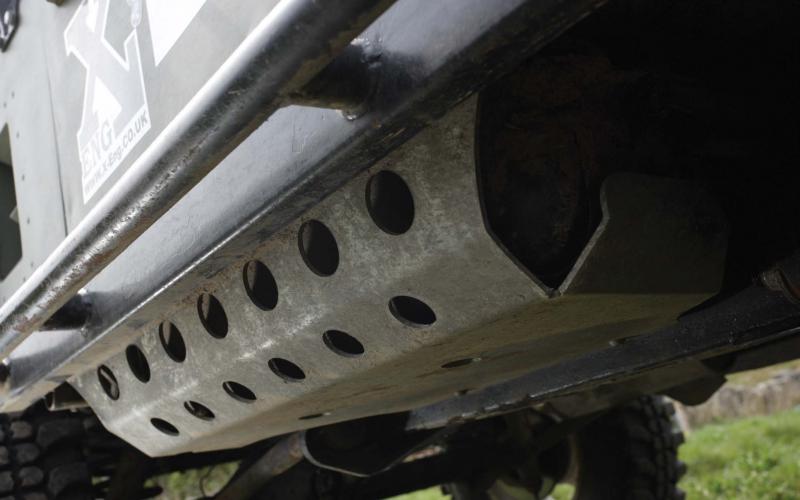 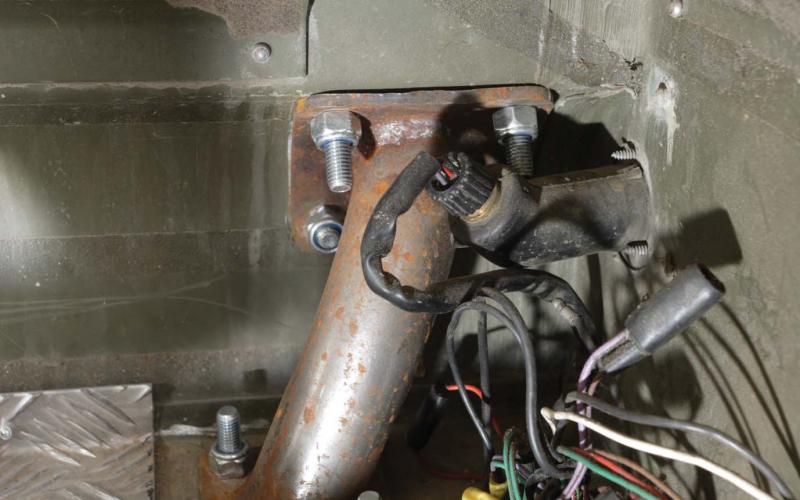 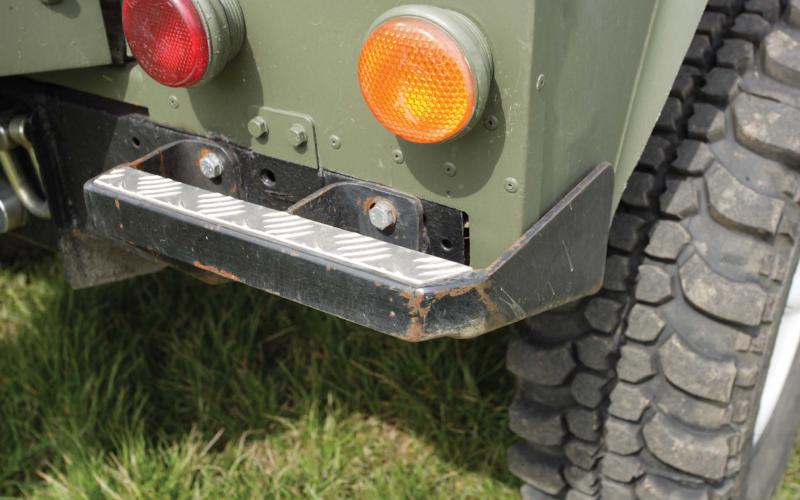 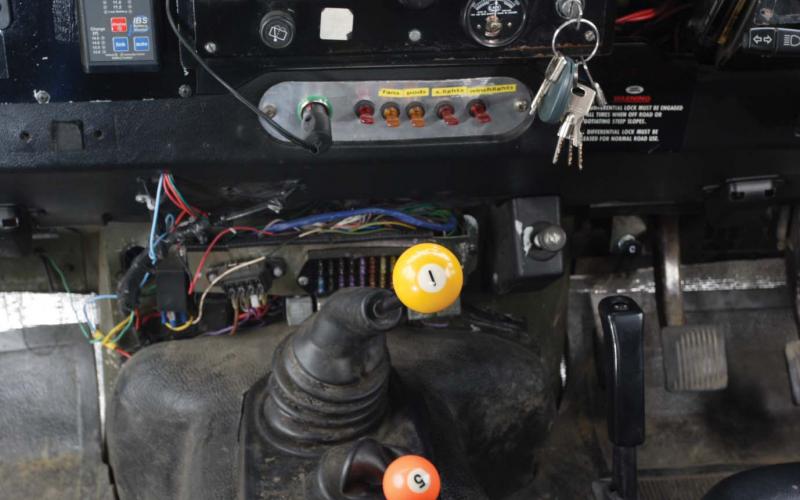 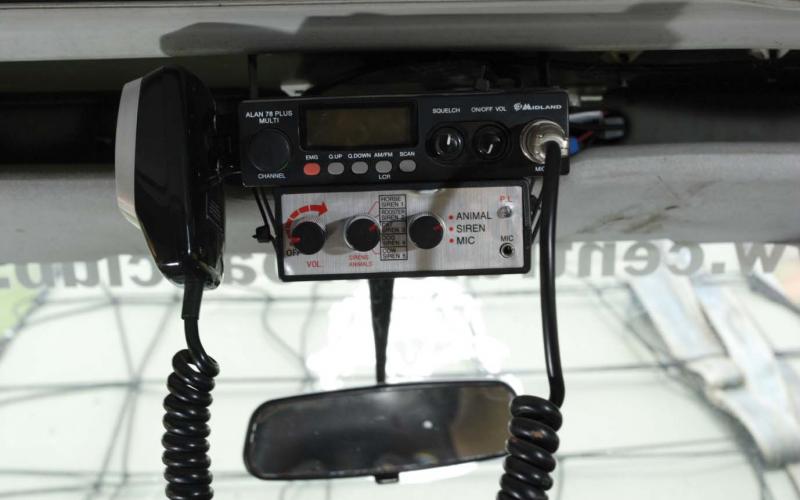 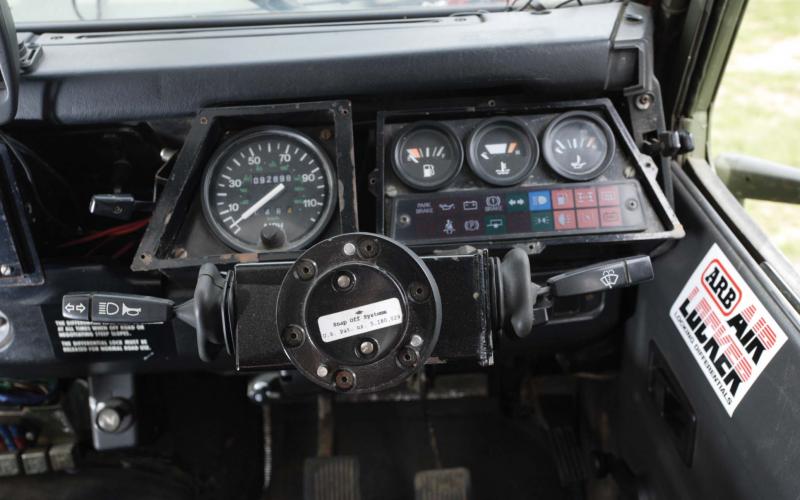 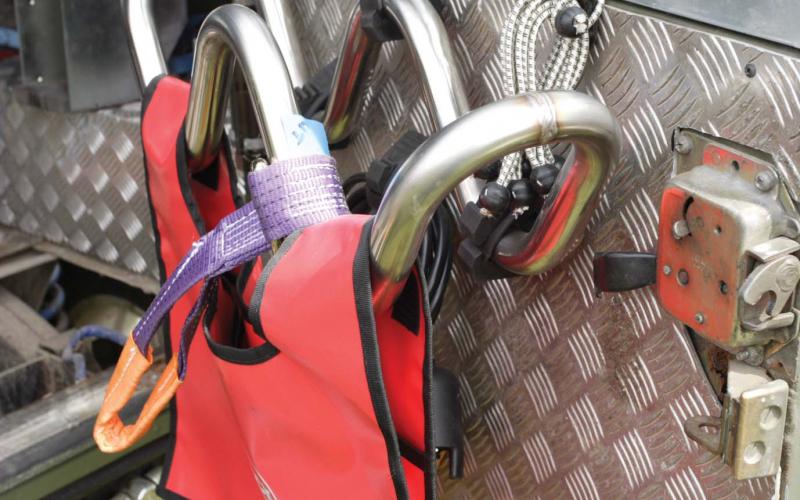 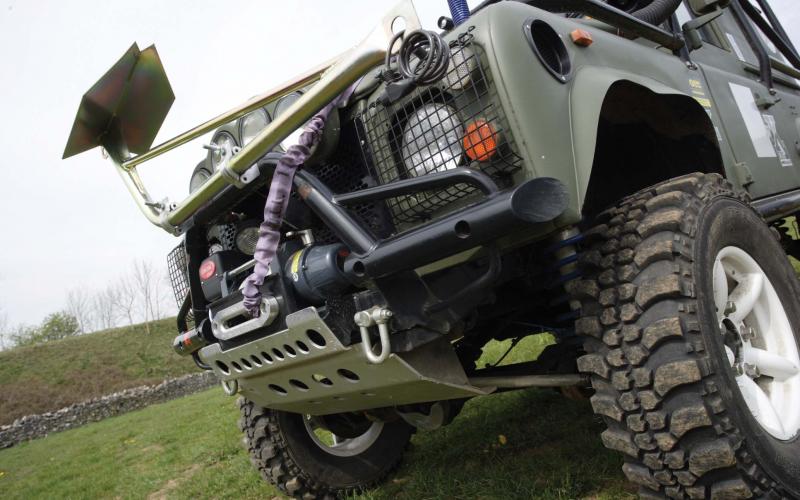 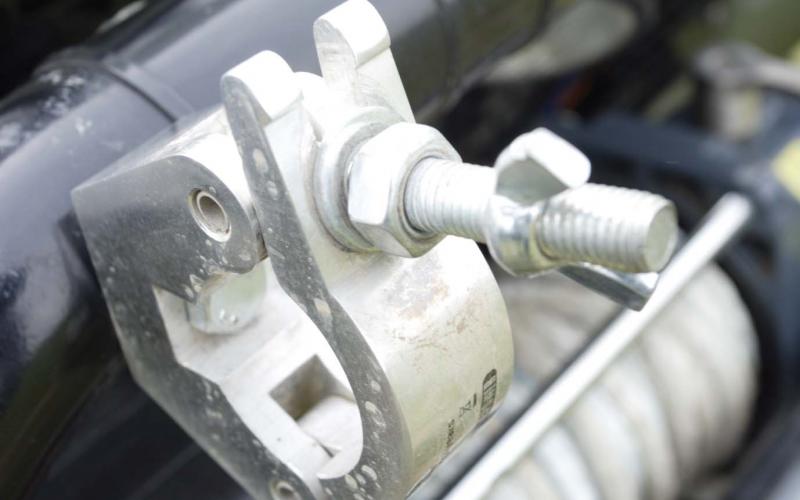 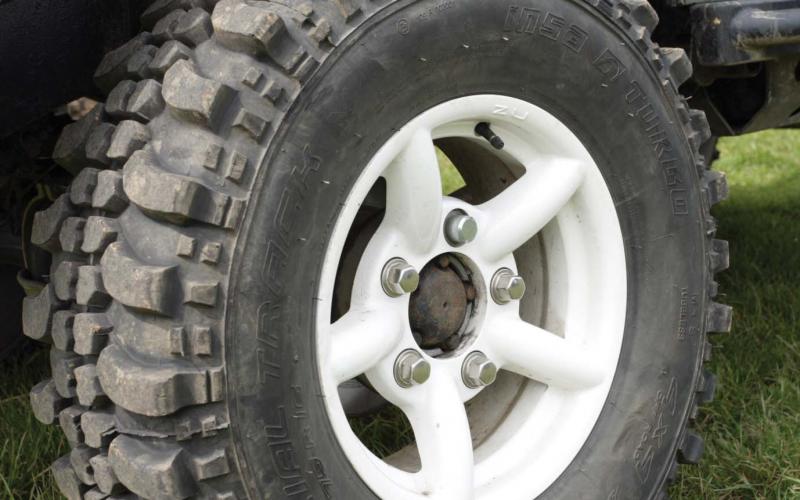 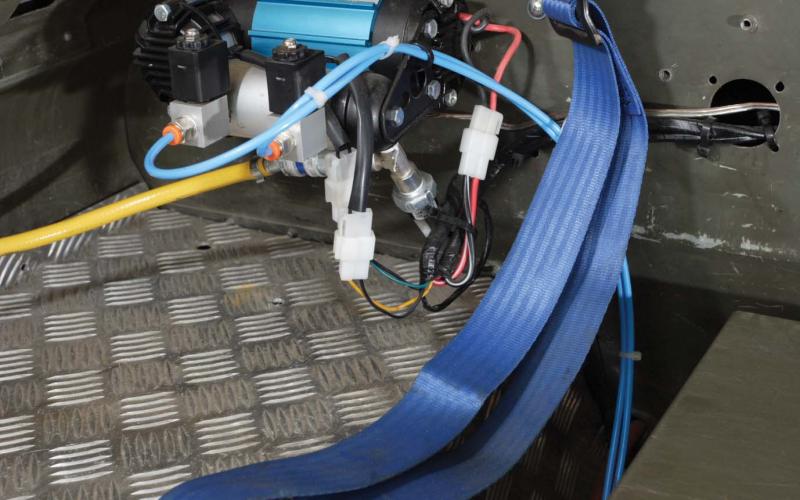 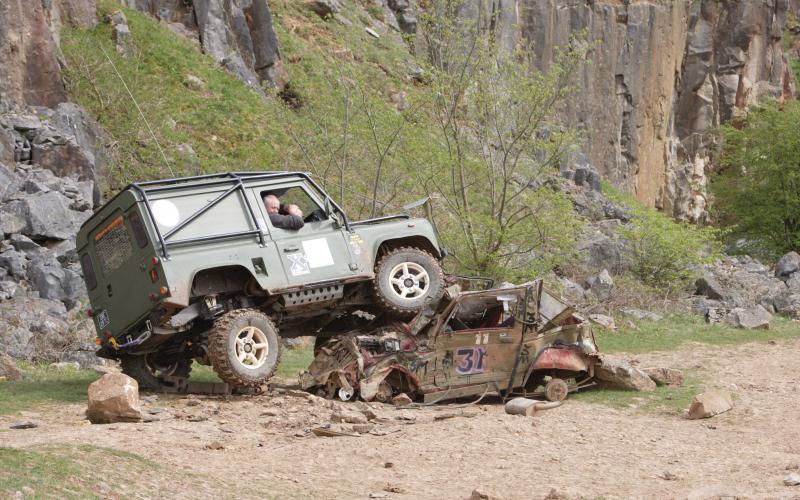 Flame-throwing, car-crushing, CCTV-recording… it’s all in a day’s work for Sam Morley’s hybrid Land Rover. Go beyond the thrills and spills, though, and you’ll find a brilliantly sorted ex-military truck that adds off-road basics like an enormously flexible suspension set-up to fun stuff like a fire-spitting exhaust.

It’s been said that if you sit a monkey down in front of a typewriter and give it enough time, eventually its random tappings will come up with the complete works of Shakespeare. If that’s true, a much lower life-form could do my job. All it entails, after all, is talking to off-roaders about their vehicles, deciding on an angle from which to write the story then sitting down with a laptop and a pint of tea to bash out the words.

The angle is often handed to you with deceptive simplicity, like a giant sea bass falling from the sky and landing ready-fried on your dinner plate. The vehicle will have a particular characteristic that demands special attention – a garish paint job, say, or a noisy engine. Or the owner will be one of those people whose every word is pure comedy gold.

The problem with a vehicle like Sam Morley’s is that there are just too many off-the-wall elements to choose from. Take its on-board closed-circuit television system: if it wasn’t for the trick suspension that enables Sam to drive over scrap cars, that alone would be a great angle. But in comparison to car traversing, CCTV seems rather an irrelevance. And even this begins to look tame when you consider that the Land Rover exhales a six-inch tongue of flames whenever it reaches 3000rpm.

So, we’re not short of talking points on this one. What these attention-grabbing characteristics are in danger of obscuring, however, is the fact that this NATO green 90 lookalike is also an exceptional off-roader, capable of holding its own in the very toughest conditions.

Sam bought the vehicle from Anchor Supplies as a direct-release ex-MoD Series III. The Land Rover had been used by the Army as a bomb disposal truck – an existence that must have seemed fairly easy in comparison to life with Sam. He likes to do things to extremes, you see, and his off-roaders are no exception. He’s owned a lifted Hi-Lux, a Mark 1 Pajero, a Daihatsu Fourtrak and three other Land Rovers in his time. Each has been more hardcore than the one before, and his current Landy is something of a pinnacle.

As a professional restorer of ex-military Land Rovers, Sam didn’t waste any time in refining his own vehicle. A 200 Tdi engine was his first addition, followed by some major surgery on the flaky Series bodywork. ‘The vehicle was in fair order,’ he says, ‘but it needed some cosmetic attention. I eventually replaced the body with one from a 90, because I much prefer its appearance.’

While changing the suspension from leaf to coil springs, Sam took the opportunity to strip the chassis and remove the rear crossmember. This latter mod was designed to create space for a large rear winch, which he wanted to mount flush so as not to eat into the vehicle’s departure angle. It’s a tidy job; the Superwinch TDS 9.5i with uprated drum and motor that lives there now is very nicely tucked away. There’s another uprated Superwinch at the front, too, perched atop a tubular bumper from Scorpion Racing.

If these modifications give a sense of Sam’s motoring predilections, the latest engine to feature beneath the Land Rover’s bonnet provides a further hint. The 200 Tdi eventually blew up while Sam was competing in the Mac 4x4 charity event. Having already spent no small amount of time and money having the diesel lump tuned and rebuilt, he decided to cut his losses and source a replacement power plant. For a self-confessed petrol-head who once competed in Vista race car events, Sam’s choice of a 3.5-litre V8 with a potential power output of 220bhp is by no means surprising.

The engine comes from a European-spec Land Rover 110, but that’s only half the story. In addition to uprated cams (taken from a 3.9) and a skimmed head, the engine is fitted with Stromberg racing carburettors. These were chosen after an unsatisfactory dalliance with SUs, and Sam has rigged things up so each is fed by an individual fuel pump. It’s a novel configuration, but it works effectively – and with the bonnet raised slightly to account for the extra height of the aftermarket carbs, it gives the Landy an interesting hot-rod look.

The same could be said of the exhaust, provided your tastes are for fire and brimstone. Sam fabricated a one-off system out of three-inch pipe; the four-into-one tubes pass through a modified Ford silencer before exiting at the side of the vehicle, giving that gentle burble for which the Rover V8 is so well loved.

So far so good, but it gets better. When Sam tried the engine out on its new exhaust, he found that it starts blowing flame at 3000rpm – a feature that has won the Land Rover a number of admirers at shows and off-road events.

Another aspect of the car that never ceases to impress is related to its unusual suspension set-up. The hybrid runs with +6-inch Rockstomper springs, complemented by Pro-Comp ES9000 shock absorbers located on –3” mounts. Sam fitted the springs upside-down, which he reckons is better for tackling really large objects (such as cars, for example) as it tends to push the body up rather than the axle down. He says that this creates something of a floating sensation in the cabin, and isn’t so good in deep mud, but that’s no big deal as his preference is for the sort of off-roading that takes place in deserted quarries. He believes rock crawling is the next big thing for UK 4x4 fans, and his Land Rover has been designed with that firmly in mind. To that end, the extra articulation facilitated by the suspension lift is enhanced by front and rear X-Eng dislocation cones. It enables Sam’s choice of Insa Turbo or Anaconda tyres (he switches, depending on conditions) to hug the ground, with the result that the all-round ARBs can on occasion seem rather superfluous.

Mind you, it’s good to know that Sam has an extra aid to traction available when needed. To compensate for the strain the lockers put on the drivetrain, the Land Rover runs with 110 CV joints and hardened halfshafts. The axles themselves are 10-spline units taken from a 1970s Range Rover Classic, and were completely rebuilt by Rakeway – a company whose engineering prowess will be familiar to regular readers. A rear disc brake conversion and four-pot calipers front and rear help improve the hybrid’s stopping power, and the home-made diff guards keep damage at bay when the axles drag.

Delivering power is not a job for faint-hearted equipment when you’re talking about an engine that spits fire. That’s why Sam opted to install an LT85 gearbox and transfer case combination, used in conjunction with a conversion clutch. To counteract the endemic weaknesses of the LT85, Sam had Rakeway rebuild it using Ashcroft internal components. While he was at it, he ordered modified propshafts, reinforced and corrected to take account of the increased wheel travel. The resulting transmission configuration has bullet-proof credentials to match the Land Rover’s military heritage. Sam is certainly pleased with the set-up, and claims to need little in the way of ongoing repairs when he’s enjoying himself off-road.

Regular sojourns with the Central Off-Road Club form the bulk of such enjoyment. The club raises a lot of money for charity, by donating all of its profits to the Mac 4x4 coffers, and its members have a taste for some pretty extreme stuff.

It’s fortunate, then, that Sam’s Land Rover is armoured in all the right places. He removed the sills in order to fit custom-built rock sliders, and the fuel tank is a military-spec double-skinned item. Not satisfied that this alone will prevent damage in the event of a bump, though, Sam’s taken the extra precaution of fabricating a tank guard.

This belt-and-braces approach is evident throughout much of the project. It means that the Land Rover is in some ways over-engineered – how many other off-roaders feature three Optima Yellow Tops with IBS split charge? Better that than a vehicle which is under-equipped for the rigours set before it, though.

And Sam is keen to keep learning, both in terms of his spanner work and his performance behind the wheel. The CCTV cameras record action outside and inside the car, and Sam keeps a record of events in order to hone his and the car’s abilities. ‘The CCTV started as a bit of fun,’ he remarks, ‘but it’s a really useful learning aid. I can set it up for less than £100, and lots of the vehicles I refurbish end up having it installed.’

The Tornado Motorsport roll cage begins to look like a must-have modification when you consider Sam’s love of off-roading in rocky places. Likewise the braided brake hoses and figure-hugging Cobra racing seats with three-point harnesses, all of which contribute to the Land Rover’s ongoing safety and reliability.

Just in case the worst should happen, Sam keeps a set of spares, a first aid kit and a toolbox in separate military ammo cases stowed in the rear. They’re easy to reach in an emergency, though you won’t be surprised to hear that Sam has so far had little need for any of them.

That’s because of the close attention he has paid to getting this build right from the start, and to maintaining it in exceptional order. Sam is the first to admit that the dull green paintwork gives the hybrid a rather world-weary appearance. But looks can be deceptive, and anyone who sees the truck in action can’t help but be impressed by its abilities.

Ultimately, of course, every off-road enthusiast knows that actions speak louder than words. And that is why Sam’s Land Rover is about so much more than a flaming tailpipe and eye-catching, car-clambering antics.

This is a vehicle that’s well and truly capable in its owner’s chosen arena. Everything else is just a sideshow, a distraction from the real business of rock-crawling mastery. All the same, though, it’s a very helpful sideshow... especially when, like me, you’ve got a feature to write.

Sam says: ‘Needless to say, I was extremely excited when the Land Rover was ready to be driven for the first time after the engine transplant and rebuild. Anticipation built as I jumped behind the wheel and fired up the V8 engine. My excitement reached fever pitch as I tried to drive forwards... but I couldn’t get the thing to move! I tried all sorts of remedies, but the vehicle wasn’t going anywhere. It wasn’t until I’d fiddled around for two hours that I realised my error: I’d forgotten to install the clutch! Talk about feeling like a plonker...’