Vehicles > Toyota > Bashing on regardless 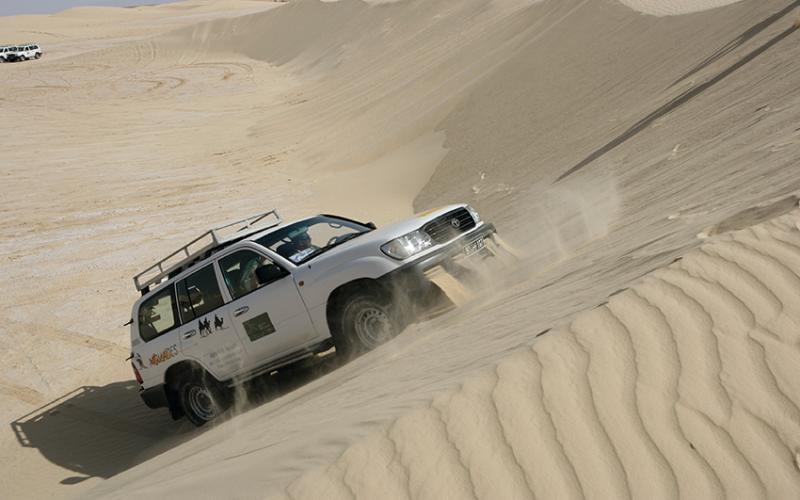 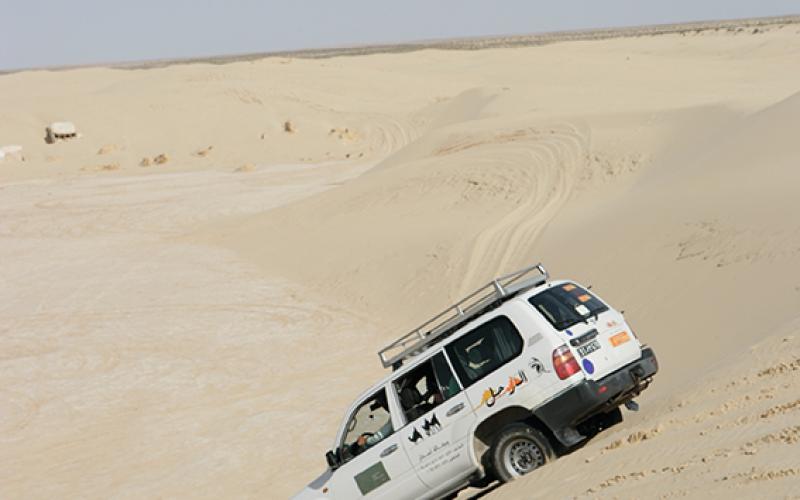 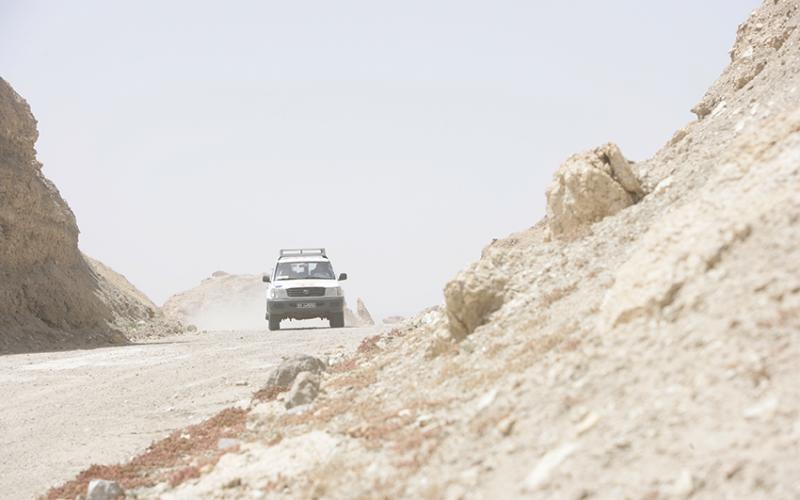 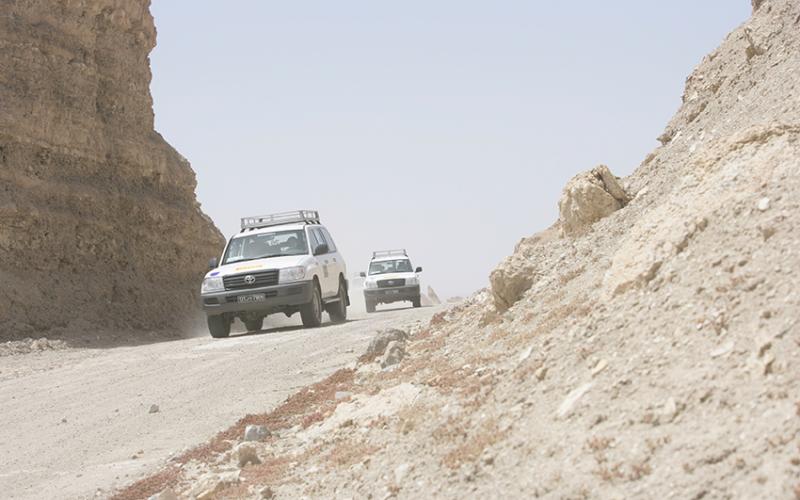 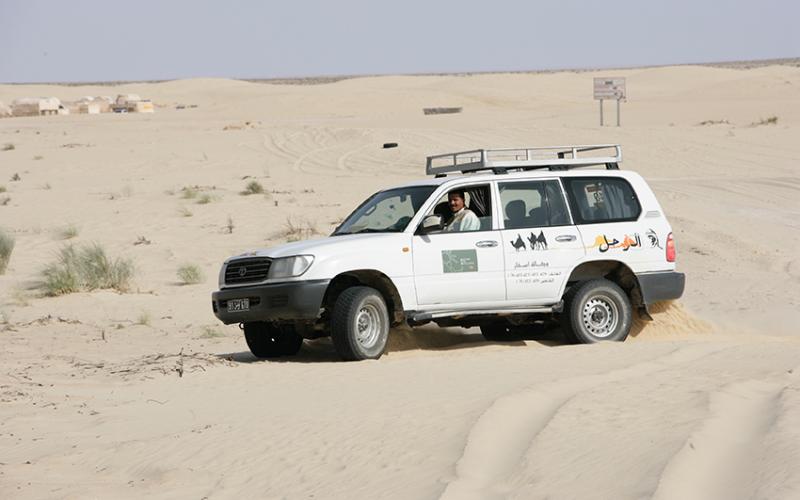 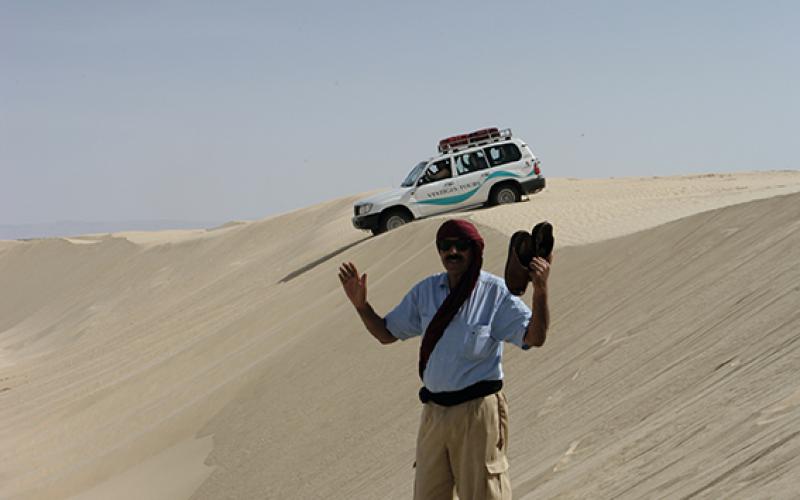 When you do your off-roading in Britain, no amount of it will ever teach you how to drive on sand. So when the opportunity to go dune bashing on the edge of the Sahara comes along, it’s time to forget everything you’ve ever learned about mud – and start paying attention to why 90% of the vehicles around you are Toyota Land Cruisers…

Living in Britain, as an off-roader you can go through your whole life without ever driving on sand. There’s a few lanes here and there with half an inch of the stuff over their surface, and one or two hills in Hampshire’s military reserves that faintly resemble dunes, but the sort of stuff that is off-roading in some parts of the world just doesn’t exist. Pendine Sands is fun, but it doesn’t count.

Not when the average 4x4 in Oz, the Middle East, parts of the USA and much of North Africa spends most of its life on the stuff, it doesn’t. And that, of course, means one simple thing: most Brits haven’t a clue how to drive on it.

That’s not me being patronising. I am most Brits, here. Put me on a set of tyres that’s all skin and bones, show me the mud and like most of us, I’ll fancy my chances. Rocks, I’ll have a go at, knowing full well that we don’t really have any of those here either. But sand – proper deep, dry, power-sapping sand that goes on and on as you’re trying to climb a dune that disappears into the sky as the sun screams in your eyes – faced with that, I’m a duffer.

I say I am a duffer. Maybe I should say I was a duffer. Because this story dates back to a trip a friend and I took to Tunisia a few years ago. I’d done plenty of off-roading in the UK, and a bit in places like France and Italy, so I’d seen at least a bit of variety. But I’d heard about the Saharan dunes from people who’d been to Morocco, and I was determined that in between the bouts of sunbathing, we were going to get ourselves on to some sort of 4x4 excursion. I wanted to learn what this dune-bashing lark was all about.

Something I already knew from the tales my friends had brought back from Morocco was that a 4x4 course out here isn’t the same as the ones we have back home. You don’t get a lesson from an instructor who tells you how to do it then sits patiently in the passenger’s seat while you get to grips with the technique. No, you get shoved in the back of a Land Cruiser, hang on for your life as your ‘guide’ hammers along like a rally wannabe then, when you finally make it to the dunes, you might get the chance to drive a bit if he’s not too busy showing off to his mates.

Yet I still wanted to do this. I was really keen to learn about dune-bashing, you see.

First, I learned that what classes as a ‘road’ on the fringes of the Sahara might not look much like one when you get there. As we swung off the tarmac after a predictably fraught session of body roll and howling rubber, our driver told us that this was the road to some oasis or other. Could have fooled me. It felt for all the world as if we were just tooling along on virgin sand. That’s how heavily buried the track was: just a road, like any other road, but we’d already found deeper sand than the sandiest track in Britain.

Then we got to the dunes and lo and behold, our guide turned out to be a nice one. Attentive, patient with our clumsy efforts and not interested in posturing to his friends.

They were quite interested in us, though, when my first ever attempt to scale a dune ended with one bellied out Land Cruiser. When you’re used to low second being the answer to almost everything that points upwards, finding that it doesn’t work is really quite disconcerting.

In mud, momentum is critical to maintaining traction. On sand dunes, it’s critical to floating over the surface. Both will see you sinking in if you lose it, but whereas in mud you can sometimes battle through by spinning your wheels like mad and sawing the wheel from side to side, sand is much less forgiving.

One thing that is the case on either kind of surface is that you’re supposed to let the car in front clear the hill before starting on it yourself. So all I can do is hold my hands up to this one. The guy in the Cruiser ahead of me paused as he crested the ridge, forcing me to lift – and I was already on my way up. Stupid, stupid me.

So there we are, perched on top of a dirty great sand dune with our wheels spinning uselessly. And you know what? Here’s another similarity between Britain and North Africa. When this happens, people gather round, laugh at you and take pictures.

They also tow you out, which is just as well as I’d be dead in the desert now if they hadn’t. But what I didn’t know was that our guide was actually a bit of an off-roading expert, and moments later we were gliding up and down the most monstrous dunes in the area is if they weren’t there.

Watching other vehicles from the bottom, it looked terrifying. But from the safety of the passenger’s seat, it was amazing how sedately we trickled up and down the slopes. Locking the diffs certainly helped (the last thing you want to do on the way up a dune is steer, so the front one can go in without a worry), and the big engine in the 105-Series Cruiser barely seemed to rev beyond tickover as our driver showed us, in no uncertain terms, how it’s done.

I kept my eyes open after that, and started noticing just how dominant the Land Cruiser is in this part of the world. Back where you can actually see the tarmac, old Peugeot estates are very popular, and I even saw a Simca 1501 parked outside a roadside shop. But once the sand takes over, the Land Cruiser is king. Completely and utterly – I’d say they account for 90% of the cars I saw that day. They’re white, too, every single one of them. Fortunately there are no supermarket car parks to lose yours in.

As you probably know, they’re not Land Cruisers of the kind we have in Britain. It’s a long time since Toyota GB stopped seeing this as anything other than a premium car – British Cruisers are still sensationally capable, but with all the gadgets and luxuries on them you’d never want to take the risk of trying that out. Go to Africa, on the other hand, and the same vehicle is available in a far more basic form, with a lower-tech non-turbocharged engine, a simple manual gearbox and a live front axle. Put simply, British Land Cruisers are built for British motorways and school runs: African Land Cruisers are built for Africa.

I was allowed back into the driver’s seat for another shot at the dunes before we had to head back to our resort. This time, at least I waited until the truck ahead of me had cleared the crest before getting on the gas, and this time I made it up and over. It wasn’t smooth, and I’m pretty sure I used at least twice as much throttle as our expert guide, but I managed to follow the technique – don’t back off until you hit the tipping point at the top, then be ready to get straight back on again.

Basically, there’s a thin line between bogging down on the crest of a dune and launching yourself off the top of it like a fighter plane being fired from an aircraft carrier on the end of a steam catapult. When you see videos online of people driving in dunes, it almost always seems to be of them larking around, and because the sand’s so deep there’s always a nice, soft landing. Well, those dunes can be very, very high (vertigo territory with ease), and mastering them takes a mixture of subtle technique and enormous discipline.

No small amount of patience, either, I’d say. Or maybe that’s just when you’re a local expert letting the likes of me try to get our heads around the terrain you take for granted. I’d driven my first dune, learned some stuff the hard way and gone back not so much better at it as, just maybe, a bit less bad. I’m a duffer in sand, remember… and no amount of confidence in the mud is ever going to change that.