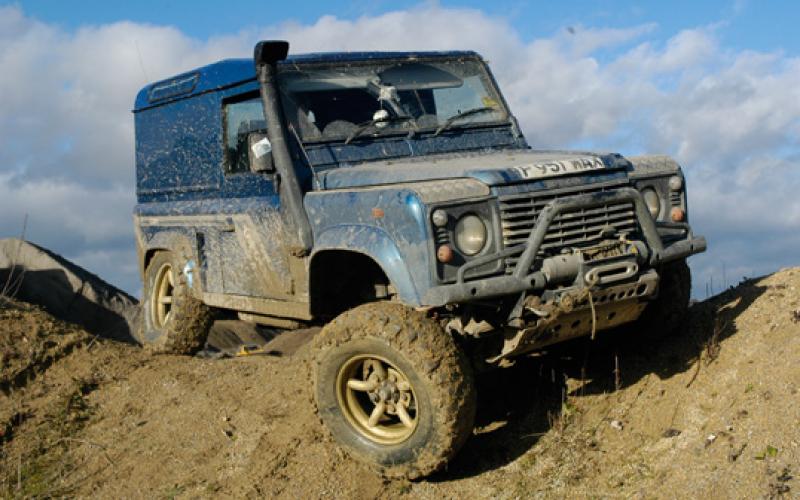 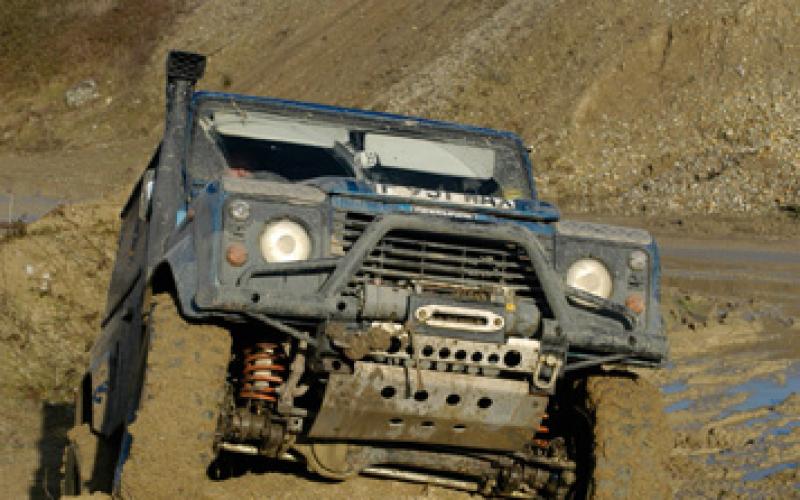 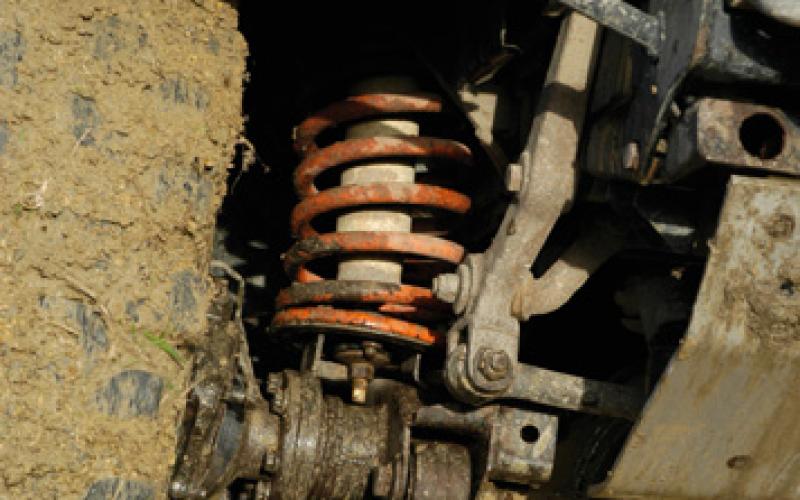 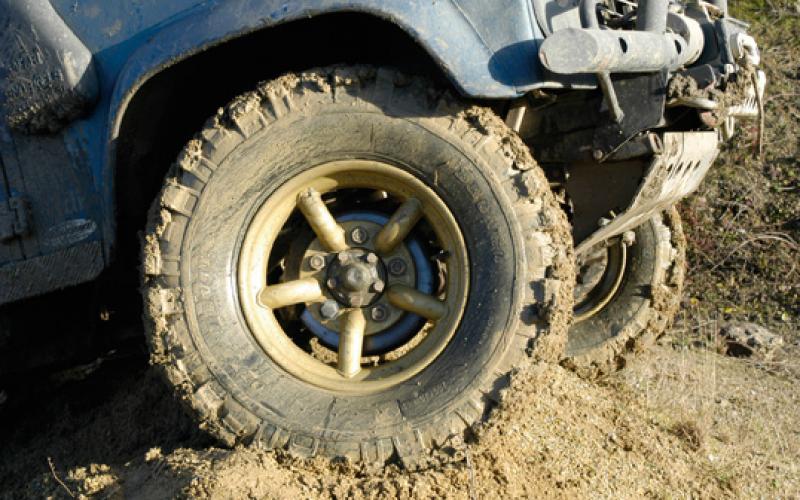 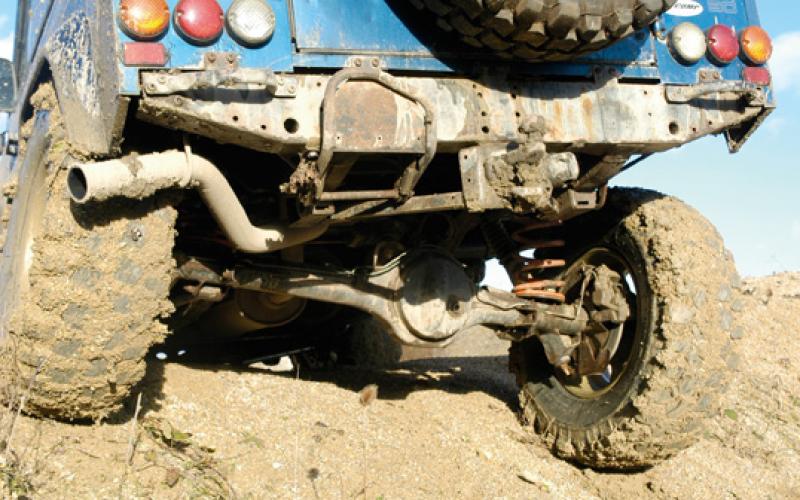 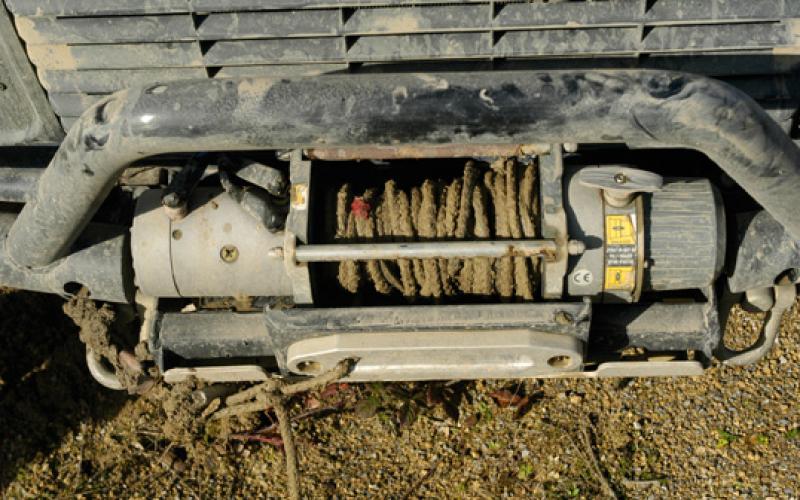 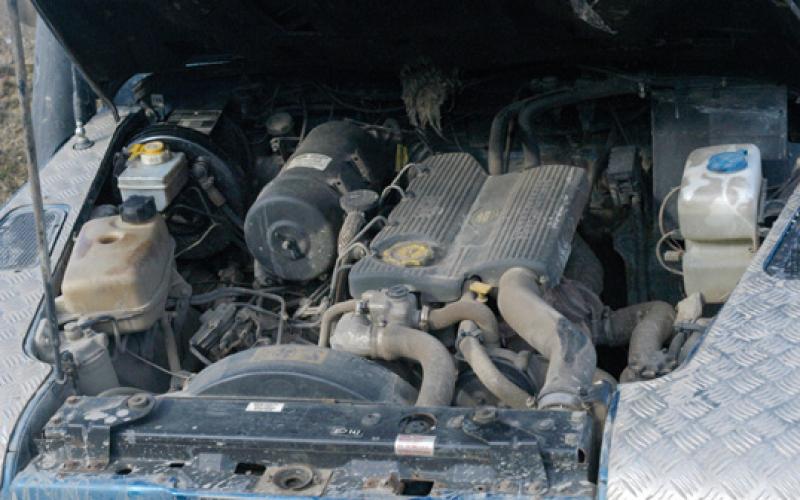 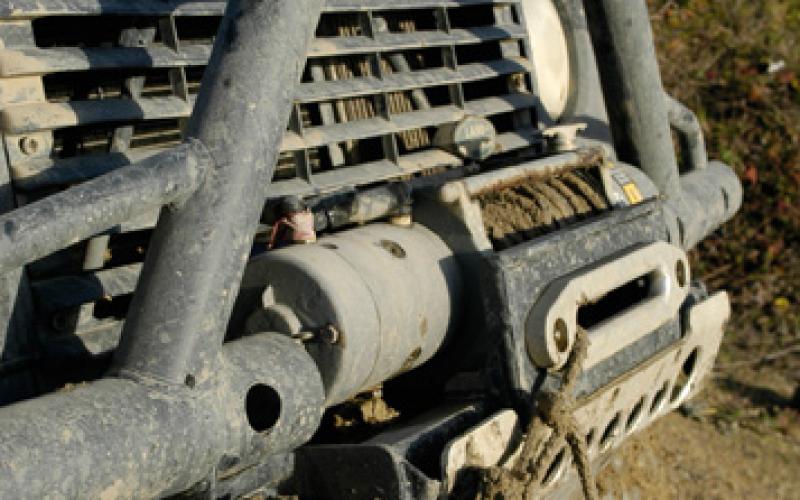 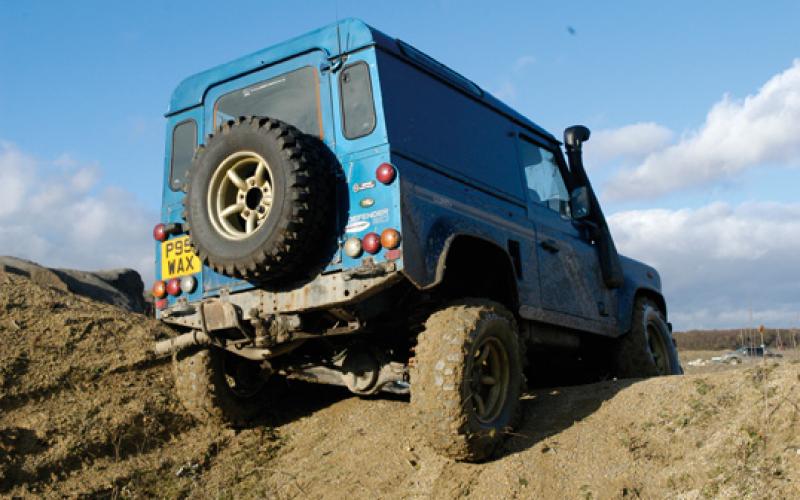 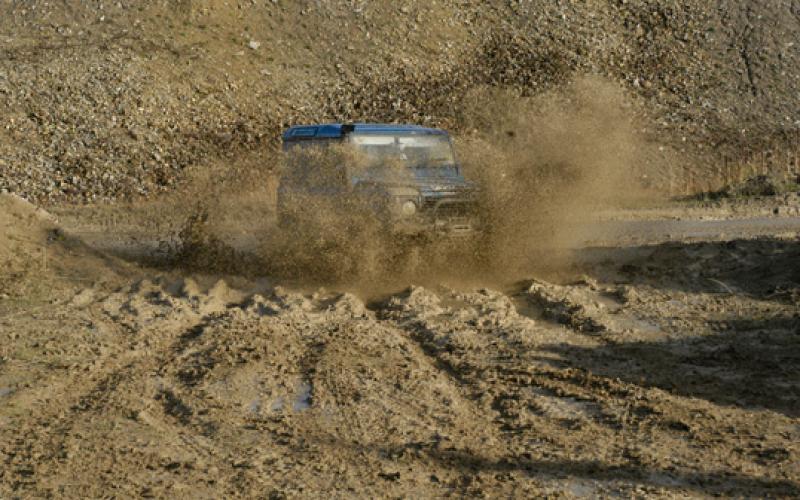 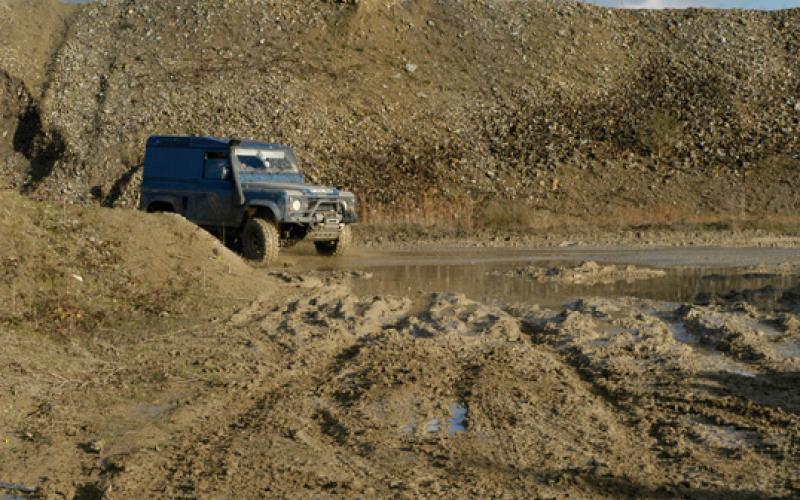 We sometimes get accused of featuring too many ‘loadsamoney 90s’ in this magazine, but you don’t need to spend masses of money to turn Land Rover’s finest into a seriously capable off-roader. Just a few well chosen mods, in fact, and you’ll have a top toy that’s ready to take on the toughest terrain around.

‘I don’t feel as if I’ve modified it all that much,’ is Tony Walsworth’s quietly modest conclusion on his Land Rover 90. ‘But it does get used well…’ A professional user of 4x4s, Tony’s been in and out of the off-road scene for the best part of two decades. He started out with a Lightweight, which he stripped down to the last nut and bolt and rebuilt as a V8 green laner.

Those were the days before the jackboots of his local authorities’ rights of way departments started rumbling across the lanes around his Yorkshire home, and after a few years in the hobby he dropped out of it for a spell. But that didn’t stop him from appreciating the many qualities of the Land Rovers in his life.

‘My business is caravan repairs,’ he says, ‘and we also site static caravans. We’ve used a 90 for quite a few years – we’ve tried other vehicles, but the Land Rover seems to be the rest. It’s proven the best 4x4 we’ve had at work, and that’s one of the reasons why I like it for this.

‘It’s one of the shortest, it’s good for traction – obviously we can’t go chewing up a caravan park – and the price is right for spares and so on, they’re not silly money. They’re fairly easy to repair yourself, they’re just a good all-round vehicle. I like a Land Rover – I’ve got confidence in it.’

So he should, owning a Discovery II as his everyday car and having had a succession of 90s as playthings after getting back into the scene a bit less than ten years ago. ‘It’s something that I’ve always been interested in,’ he says, ‘and then round about 1997 I fancied it again and got a cheap 90.’ A cheap 90? In 1997? Hard to believe such things existed back then…

Anyway, since then he’s had a variety of 90s culminating in his current plaything, a 300Tdi hard-top which he bought second-hand about two and a half years ago. It was always destined to be a toy, so rather than wasting time using it in standard form first he got straight into modifying it with the kit you see on these pages. There wasn’t really a programme of alterations in his mind – ‘it depends what catches your eye at shows’ – but having got the vehicle to where it is now, he’s happy just to use it.

No surprise, then, to learn that Tony and his off-roading mates are all Extreme Members at the legendary Langdale Quest. He also visits Kirton Off Road Centre every time it has an open day, as well as being a regular at Tong.

Between them, those are three sites with the capacity to get pretty much any vehicle into a state. What’s the worst stuck the Land Rover has been? ‘I would say Langdale, when Route 76 was opened. That was quite a tough one. It’s mud, ruts and real steep bits – there’s a lot of people go to the top of 76 and turn round and just drive away!’

But for every disaster there’s a string of triumphs, and what you’re looking at here is a vehicle with the distinction of being the first known customer’s car to conquer the rock-crawl at Kirton. ‘I didn’t know this at the time, but I was doing the rocks and a few marshals came across to watch. If you look on their website, you’ll see pictures of it on the rocks, and one of the marshals told me I was only the second one to do it. And the other one was a Lightweight that belonged to one of the marshals themselves.’

When you read through the list of mods Tony’s made to the vehicle, you’ll see that it’s really only quite lightly improved over Land Rover’s standard spec. Which just goes to show that you don’t need to make massive alterations to turn a basic 90 into one of the most capable off-roaders you’ll see.

If you’re into the idea of an ultimate competition build, you can easily spend loads of money on one of these trucks. But 20% of the outlay will take you 80% of the way there – and if what you want is a playday machine that’ll take you places others don’t even try, Tony’s 90 is a perfect example of getting the balance just right.

The 90 is on a modest lift, courtesy of plus-two-inch springs and shocks supplied by Cheviot 4x4. Like many people who only go up by this much, Tony doesn’t bother with castor-corrected radius arms, feeling that the 90’s steering and handling are still adequate with standard items.

All the same, the combination of higher suspension and a set of 33x12.50R15 Bronco Grizzly-Claws, fitted to Mach 5 rims, means the vehicle does wander a bit. ‘It’s not frightening or anything like that,’ he says. ‘But it’s not as good as my works one.’

Another issue with lifted suspension is the extra stress it puts on the drivetrain, but this, too remains standard – and after two and a half years, there haven’t been any issues with it. ‘Touch wood, up to now I haven’t had any problems with UJs and that,’ says Tony. A testament to his restraint in only taking the lift so far.

Internally and externally, the 90’s axles remain as they were when they left the factory. That’s with one notable exception; after blowing the rear diff, Tony decided it was time for an ARB Air-Locker.

Other than that, the entire drivetrain is standard. Halfshafts are all original – Tony says he examined the rear units when the ARB went in and they still looked as-new – and the axle cases haven’t been protected with diff guards. A classic illustration of how a steady, careful approach to driving can be worth more than all the heavy, expensive body armour in the world.

This is a 90 which runs the risk of getting stuck week-in, week-out. But it’s not loaded down with lots and lots of fancy recovery gear – as a playday vehicle which tends to run around in convoy with others, it’s simply equipped with a decent level of basic everyday essentials:

‘Spend it once, spend it right’ is many people’s philosophy when it comes to preparing a vehicle, but Tony took a rather different approach when choosing his winch. ‘Because we’re in and out of water all the time, my idea was that because it was only £325, if it gives up we could just throw it away and have a new one. But it’s been on two and a half years now, and it’s been excellent. It’s never let me down, so I’ve never seen the point of buying a Warn winch.’

The 300Tdi engine is completely standard, however it breathes through the inevitable Safari Snorkel. As any Land Rover anorak will tell you, this can be used to identify a 200Tdi from a 300 – on the older model, snorkels are routed through the left wing, whereas a 300Tdi like Tony’s will have it on the right.

Anoraks might also notice from the pictures in this article that despite being a Tdi, this particular 90 has a Td5 front panel. Quite why is something that will forever remain shrouded in the mists of time.

Weighing up the amount of off-roading he does against the amount of damage he’s done to his vehicle in the process, it’s clear that Tony is a pretty careful driver. But the 90 does still carry a number of items to help it shrug off the worst that Mother Earth can throw at it:

So far, the only damage the 90 has suffered has been a bent steering bar and dented front wing. That and a blown rear diff have been the only casualties, which isn’t bad going at all in two and a half years of hard action – especially as Tony says he prefers off-roading in the winter, when he reckons it’s more fun.

‘I’m pleased with myself up to now,’ he says. ‘Touch wood that’s all that’s happened. I was going to put tree sliders on it, but I haven’t even dented the sills or anything yet. I put some chequer plates on the sills ands thought that if it does damage them, I’ll put tree sliders on. But I’ve never damaged them and I do do some extreme stuff with it. Considering some of the places we’ve been, it’s got off quite lightly!’