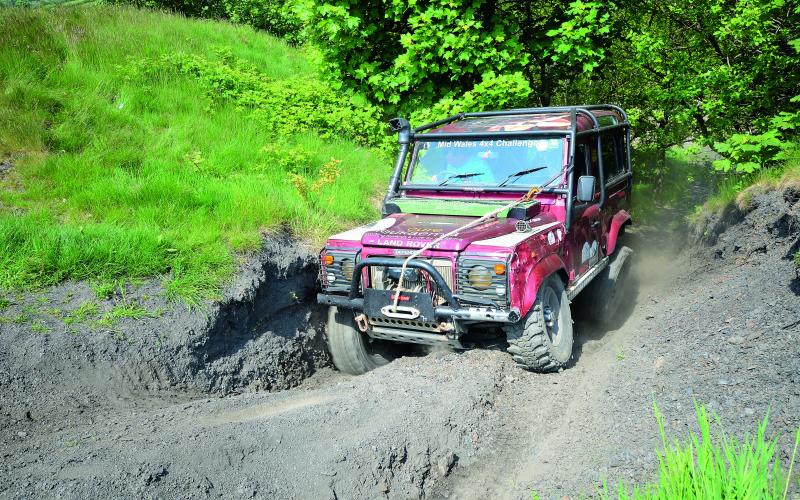 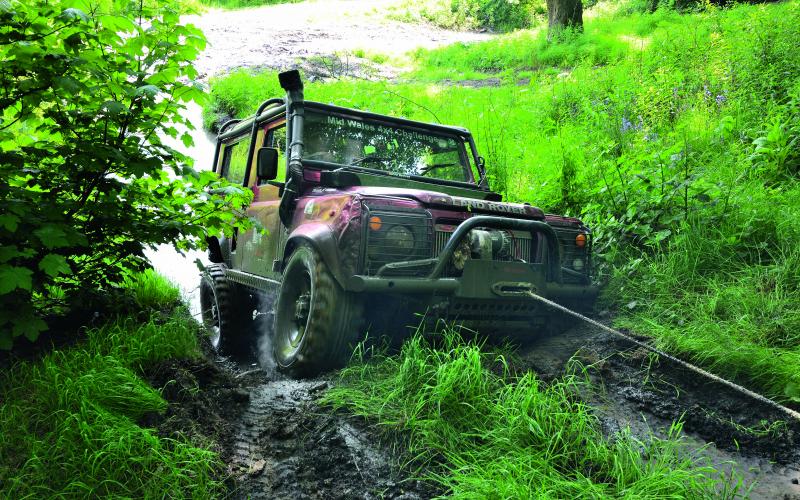 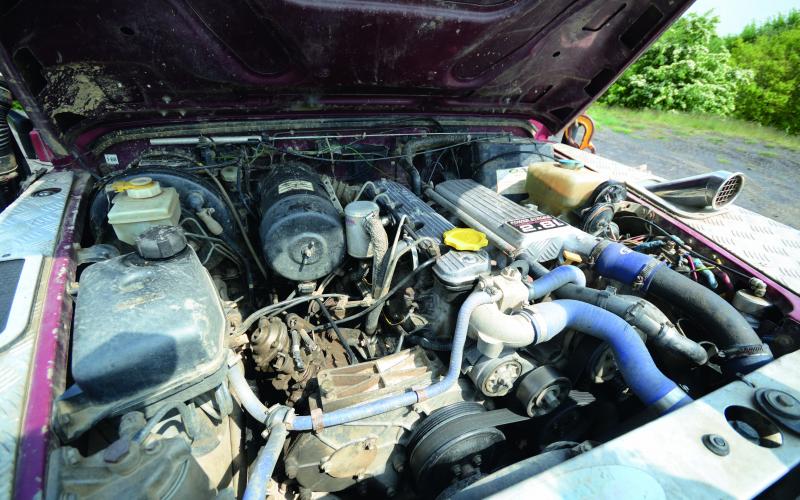 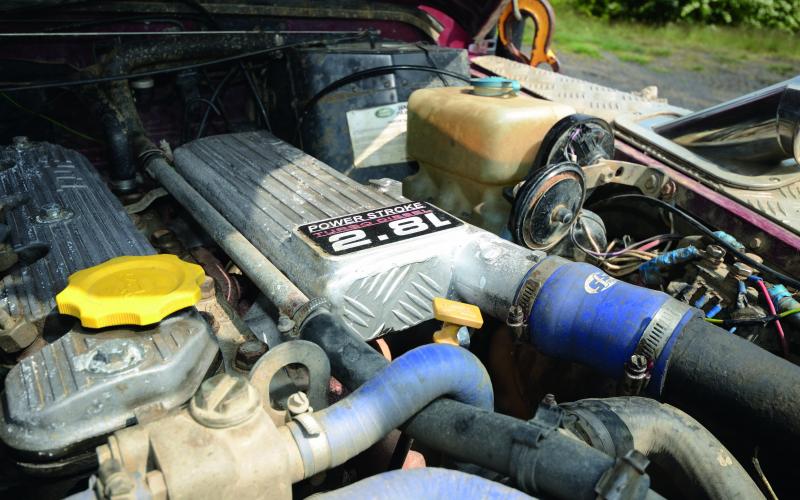 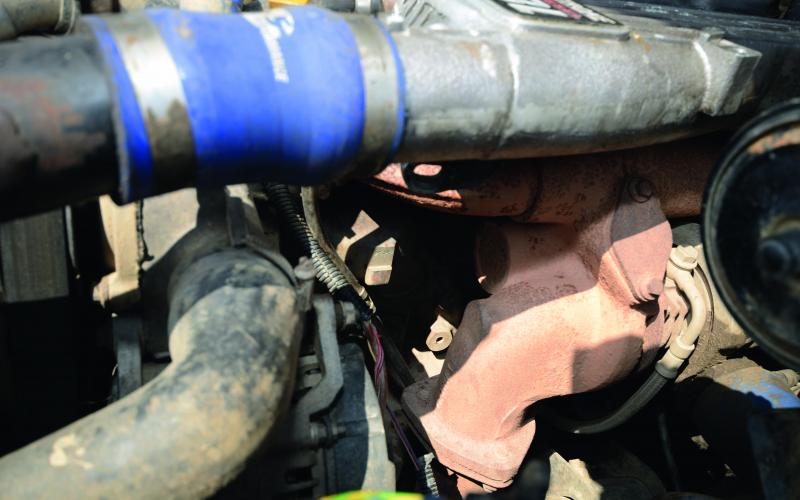 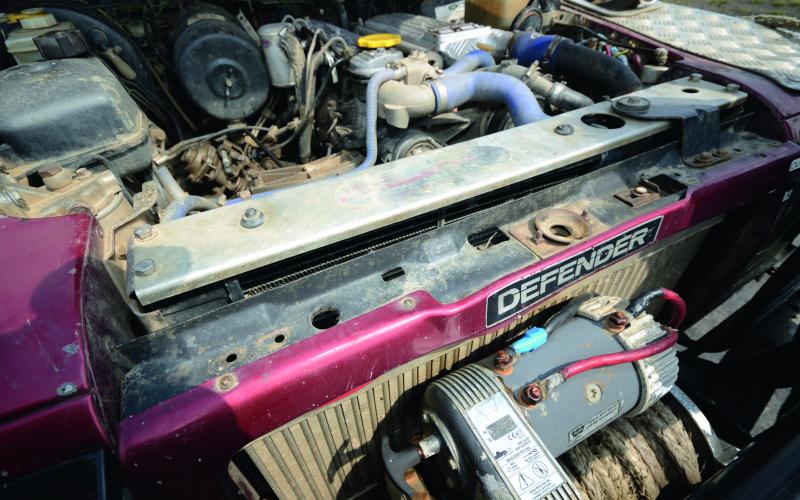 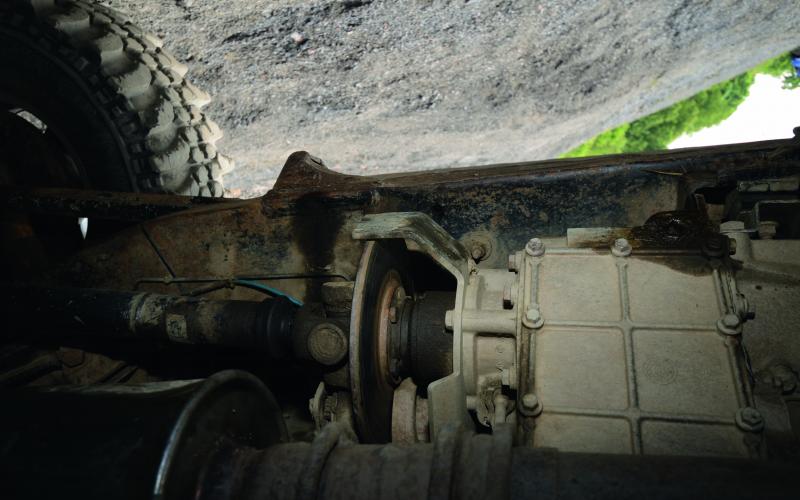 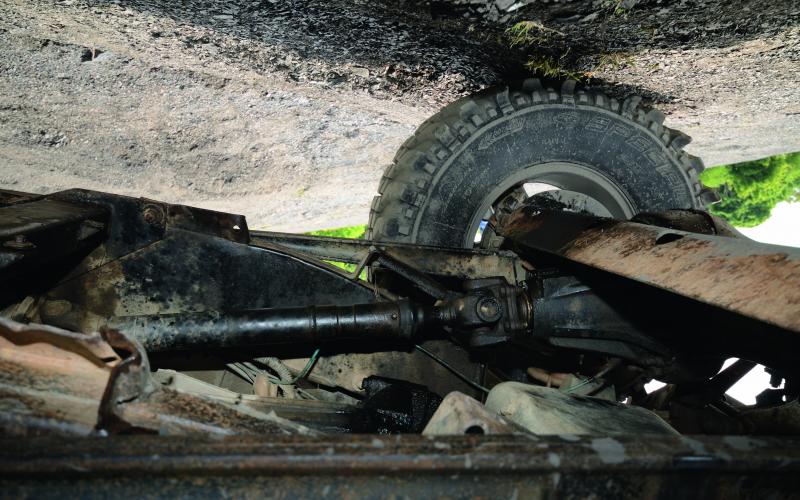 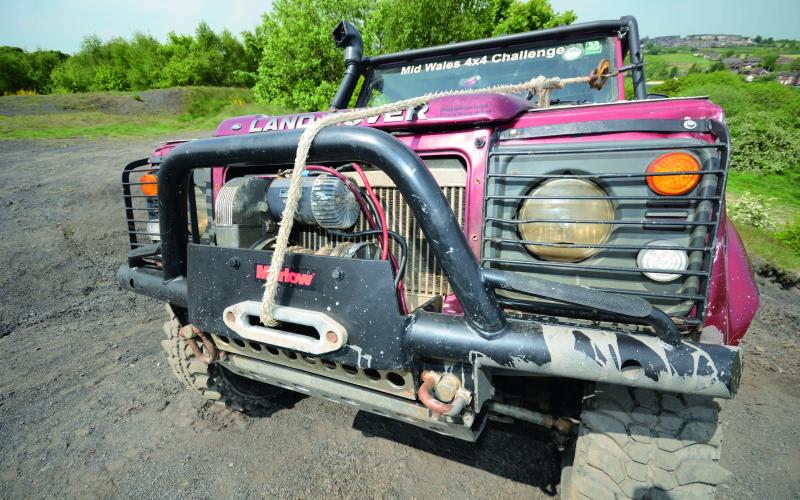 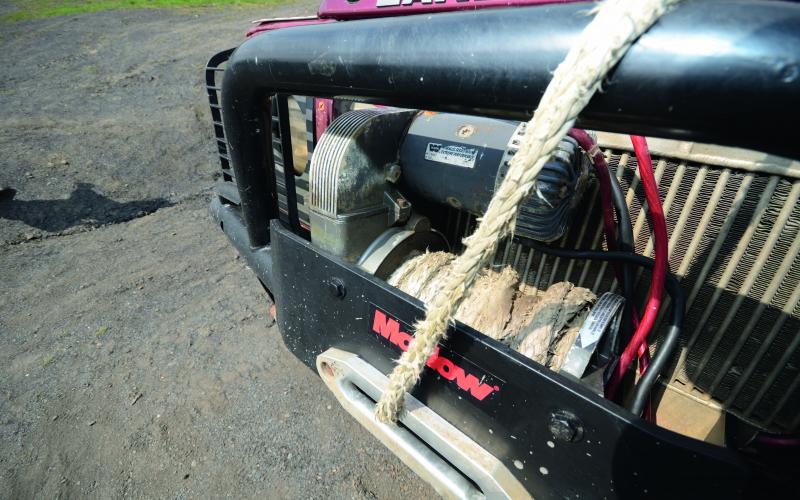 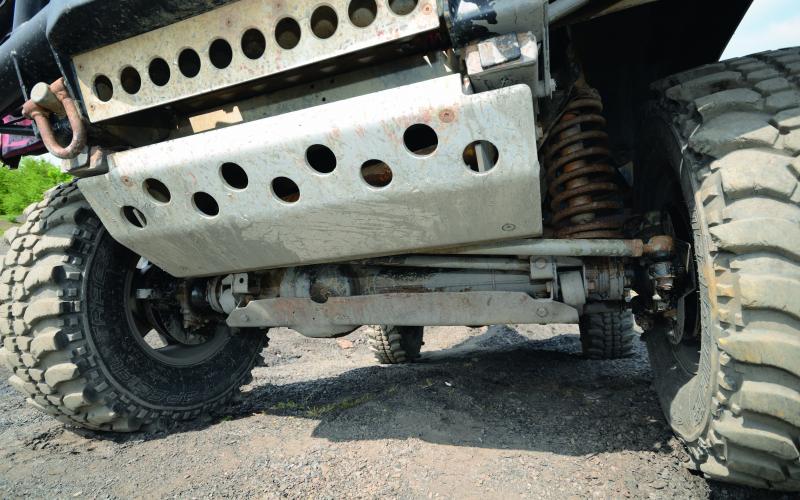 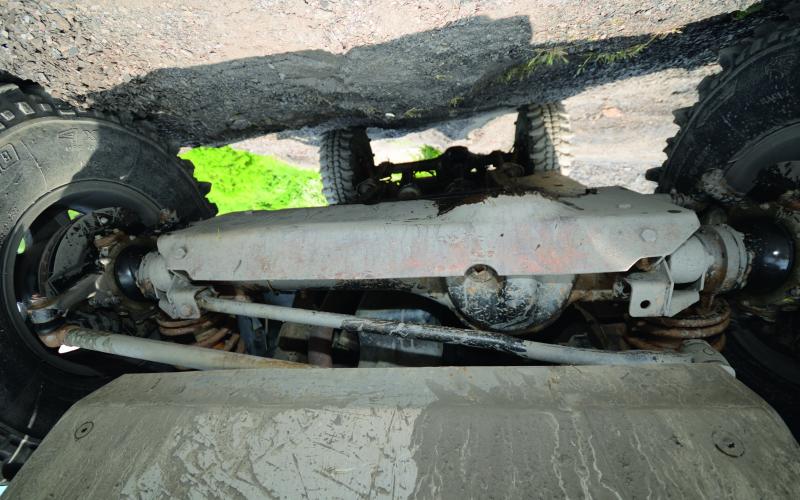 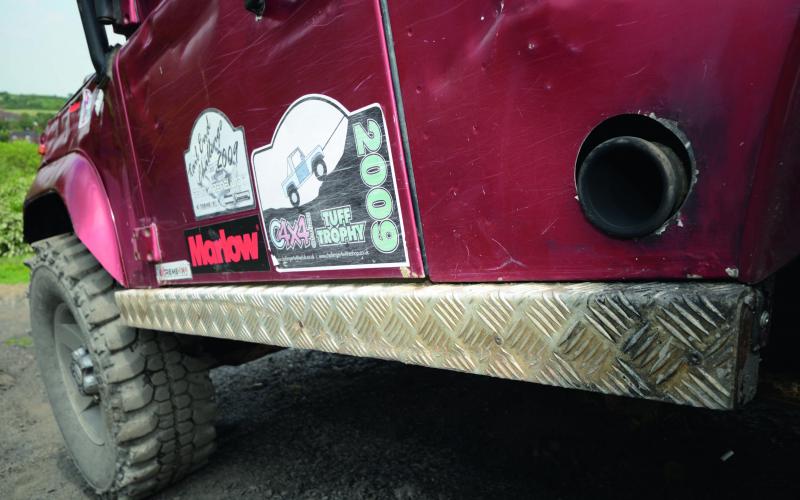 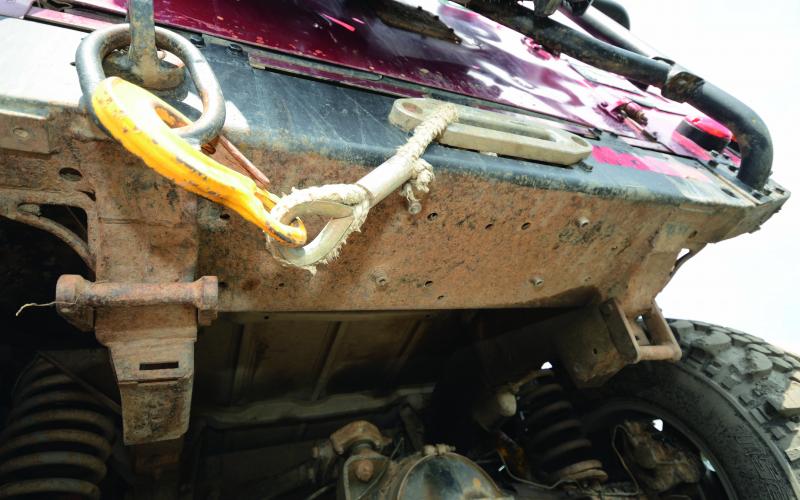 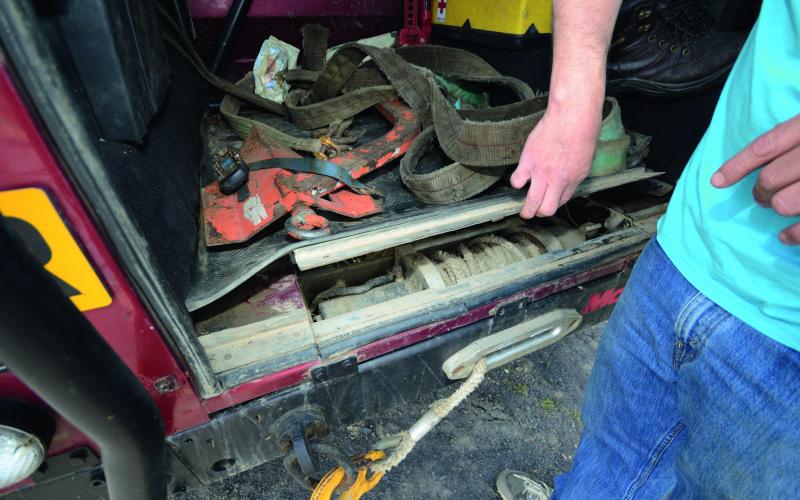 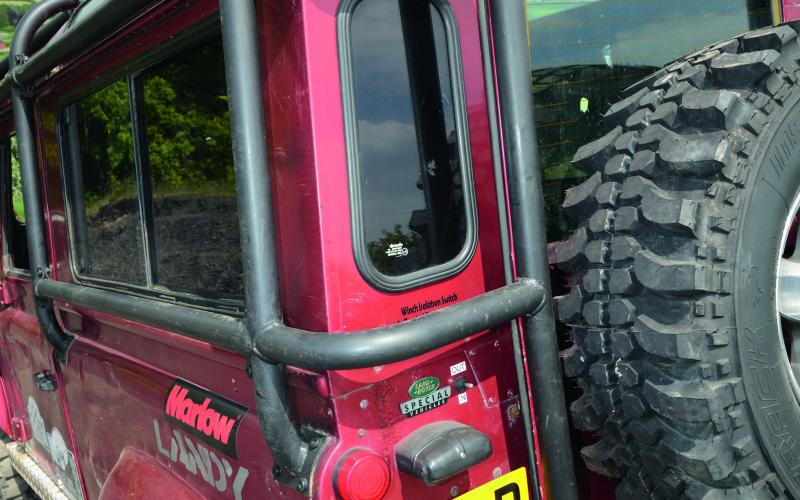 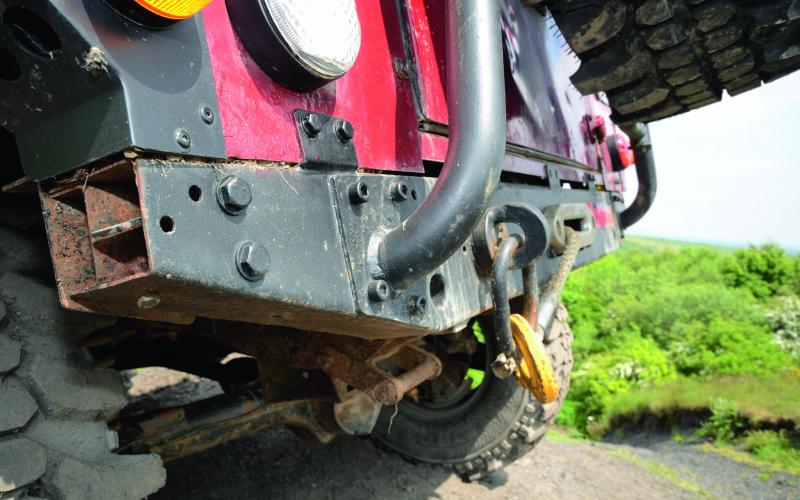 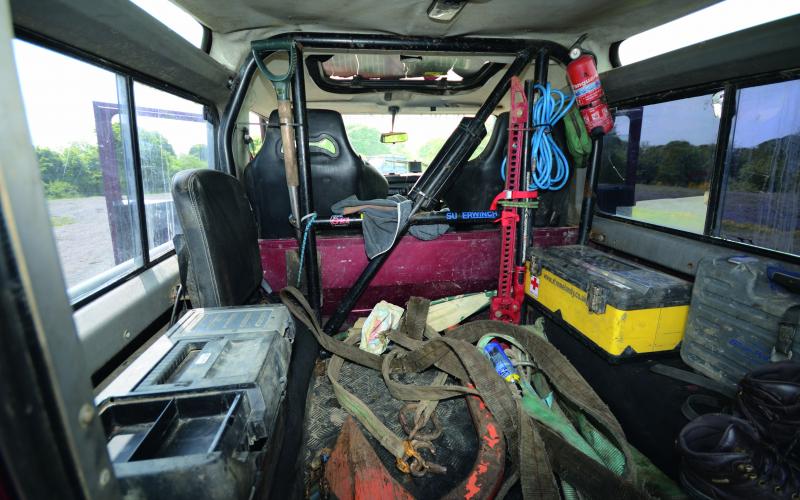 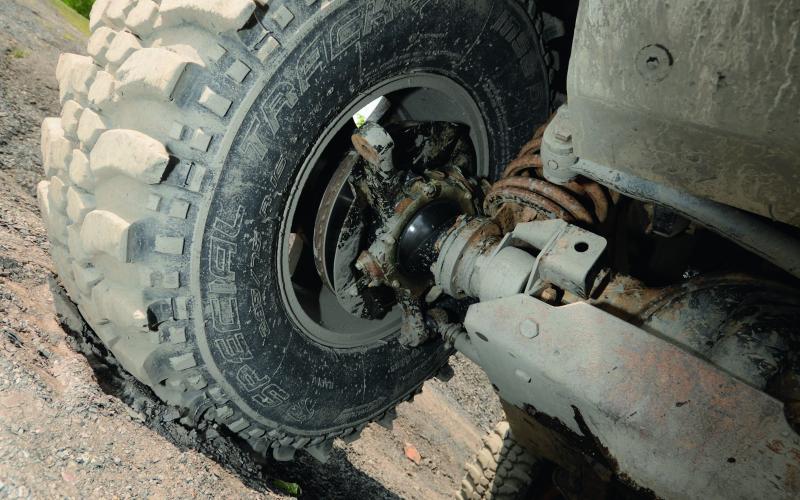 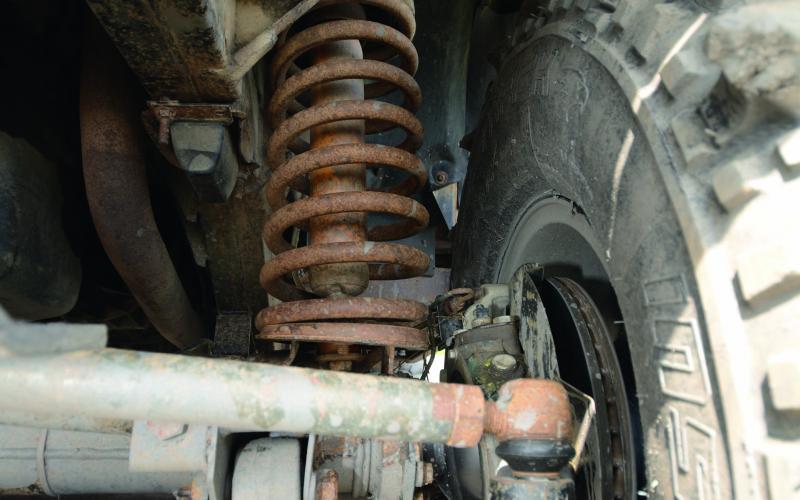 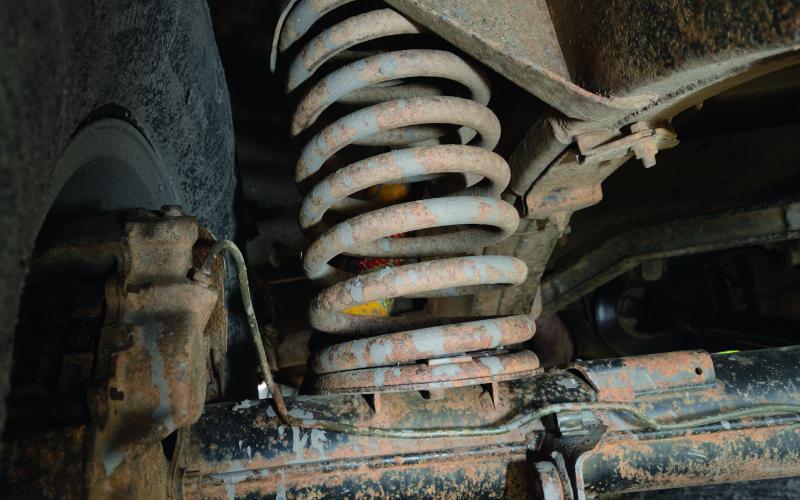 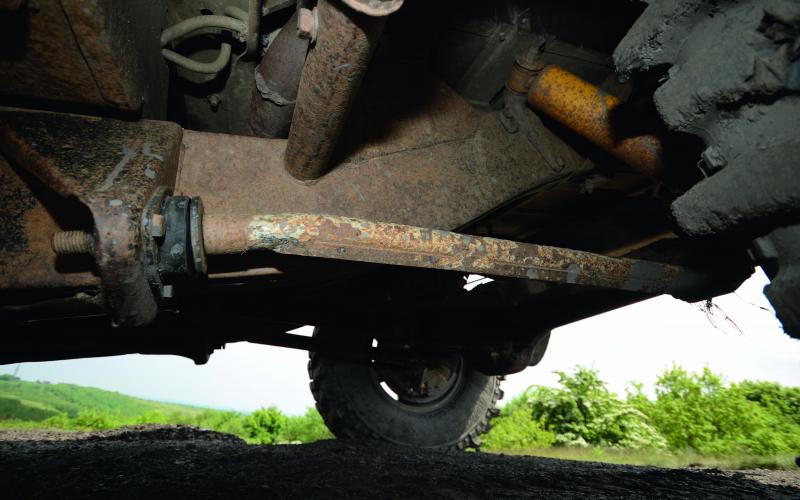 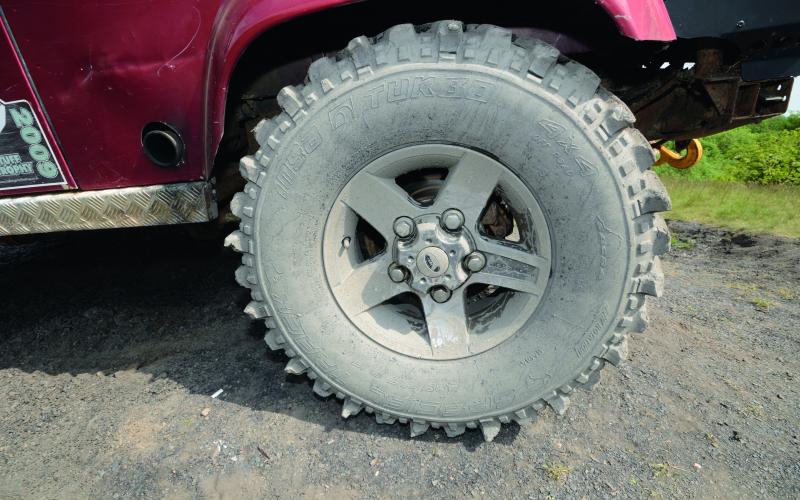 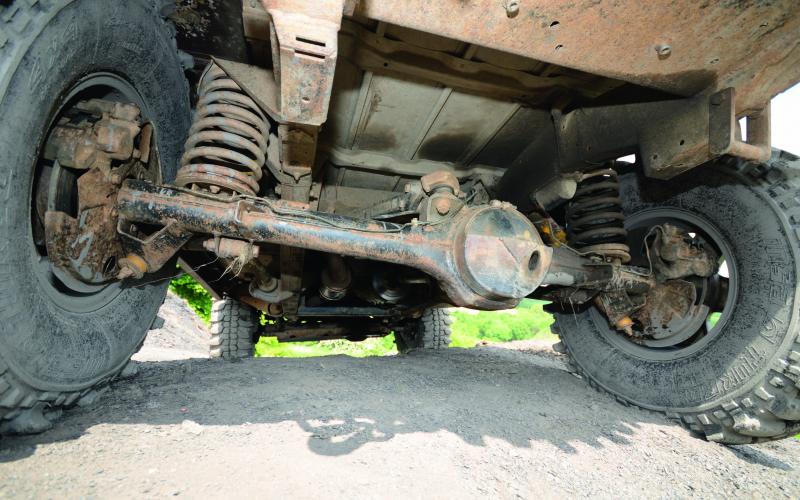 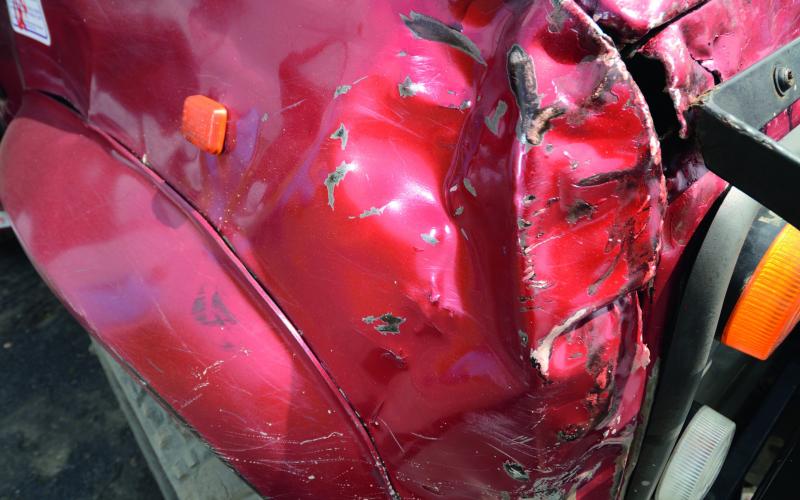 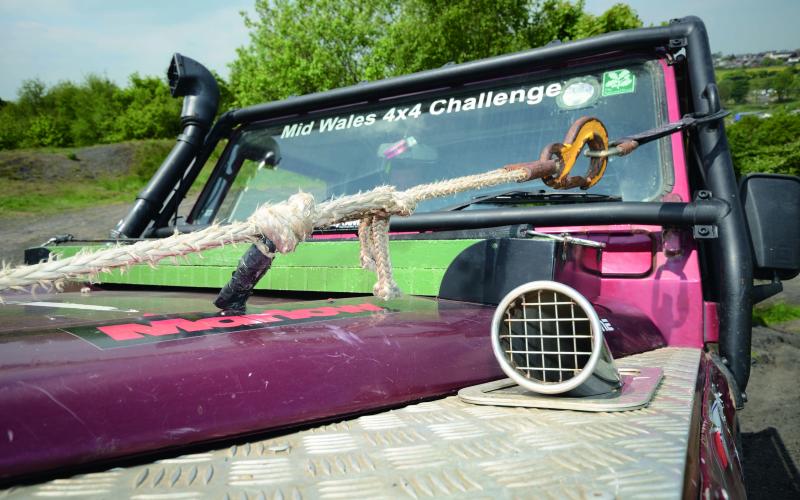 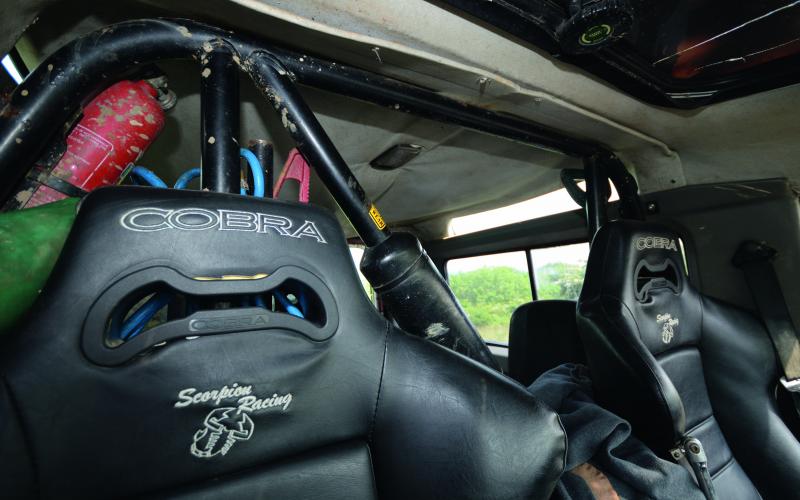 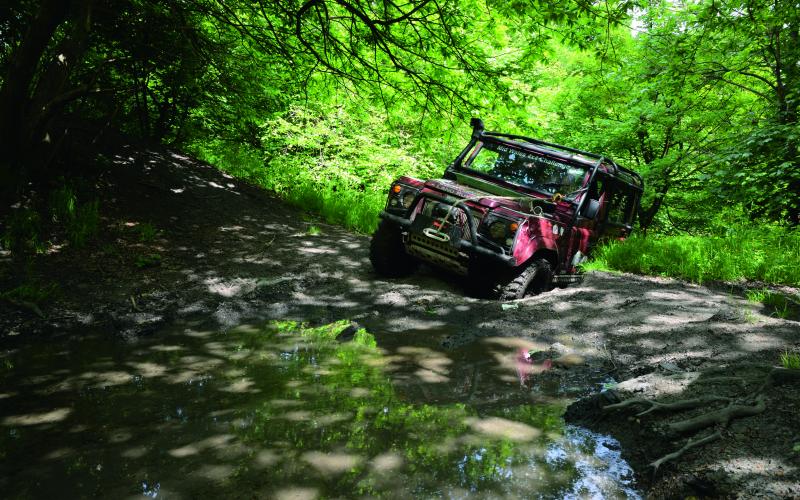 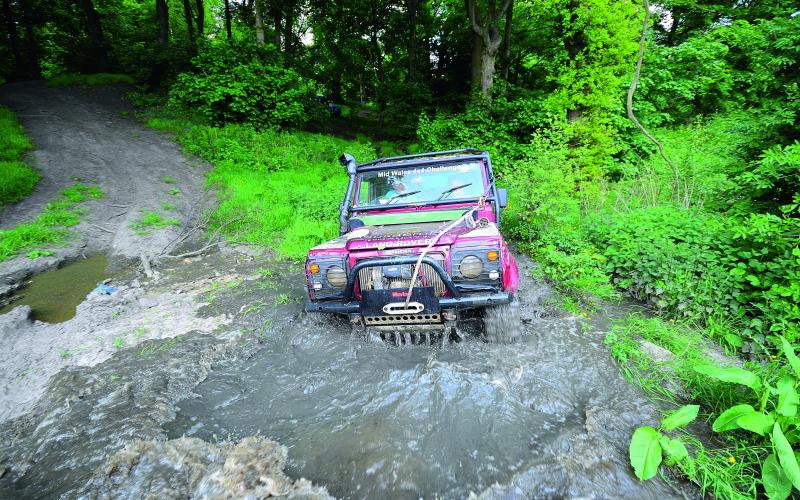 Look at Andy Jackson’s Land Rover from above, and the first thing you’ll see is a large expanse of female flesh. When it comes to the kind of body that’s held on by nuts and bolts, though, it’s a truck that’s been bloodied by the passage of time – but it’s still every bit as beautiful in its own way.

One of the wisest bits of advice you’ll ever hear from people who know their way around the modifying scene is that it always pays to start with the best vehicle you can afford. Buying a neglected high-miler might mean you can stretch to the suspension and bumpers for it without having to save up, but a fat lot of use that’ll be when the chassis turns out to be full of rot or the engine spits one out because it’s done a quarter of a million miles on half a dozen oil changes.

One of the best ways of knowing you’re getting a good one is to get a new one. It’s not foolproof (you see some awful things happening to brand new 4x4s in quarries and on construction sites, and we’ve heard stories of almost factory-fresh vehicles with welding on them that looks like it was done by a drunk), but it stands to reason that the less time a truck has existed, the less time there’s been for someone else to mess it up.

Andy Jackson is a good example. Thirteen years ago, he bought a late 300Tdi Defender 90 that was unabused and just a few years old. The perfect place to start. And he’s been making up for lost time ever since, modding and off-roading it almost non-stop.

The challenge scene was only just getting started when Andy bought his 90, and it wasn’t long before he was getting involved. ‘I have competed in many different types of events,’ he says, ‘throughout the UK and also in Spain, France and Belgium.’ If you know the Belgium National, you’ll know what that means – mud, and lots of it. But wheeling in Spain means rock and sand, so he’s right about the sort of variety the 90’s experienced, and with so many different formats having been tried in each of these countries, he’s a man who can say he knows the comp scene inside out.

Yet these days, he doesn’t bother. ‘I’ve been involved with many different clubs over the years at different levels. But now I just go out monthly for fun with regular friends.’ You’ll read about some of these guys and their own Landies in coming issues of TOR. They’re well known at playdays hosted by the tougher sites within striking distance of the West Midlands, where they’re all based, and now and then they’ll venture further afield to make a weekend of it.

During the intervening period, Andy moved over from competing to doing more and more on the organisational side, and as well as taking his Landy out to play once a month he puts it to good use in other ways, too. He was part of the team that put on a lot of events during the heyday of the Scorpion Challenge, and an interesting sideline is that he helps out local recovery companies with their more awkward jobs and flood rescues. A bit like being in a 4x4 response network, but even more so.

Yet when he shows up to pull stacked cars out of inaccessible ditches or tow them back to dry land, the guys on site must wonder what’s so special about this battered red Land Rover. It’s got an exo cage, sure, and enough of a lift to make space for a gnarly set of Simex-lookalike Insa Turbos, but in comparison to the way challenge 90s are going these days it’s verging on being anonymous. Andy very much recognises that – but rather than seeing it as a problem, as far as he’s concerned it’s just what he wants.

‘As well as the recoveries,’ he says, ‘I also use the Landy for family camping trips. So although the off-road scene has moved on, I like to keep it as standard looking as possible.’

Actually, the word he used was ‘standardish,’ but that’s probably as good as you’re going to get when it comes to a truck with two winches, front and rear ARBs and an engine warmed up using a TGV air inlet and full-width Jeremy Fearn intercooler. There’s a lot more going on with it, too, some of it familiar (such as a Scorpion front bumper and chequer plated sills) and some of it a lot less so (AP Racing calipers and SVX rims, for starters, and tucked away beneath that ally sill plate is a pair of rock sliders that’ll take the truck’s weight up all day long).

There’s also a pair of roll cages. Yes, a pair. Well, the one on the inside isn’t a full cage, but it’s made by Safety Devices and we all know what that means. The exo structure, meanwhile, is from 3M, and we all know what that means, too. So, good stuff on top of good stuff, and the 3M cage is even better still because Andy’s added a wrap-round rear to protect the truck’s bodywork still further. That thing he said about wanting to keep it looking standard is right – however hard he uses the 90 (and oh, he does), he still doesn’t want to end up turning it into a beater.

How could he, with yet another unusual touch adorning the roof? Many years ago, the vehicle was used in a promotional gig for a charity event at a lap-dancing club, of all things, which involved some pretty distinctive vinyls. With the job done, he left the artwork in place, and now his rear winch is positioned approximately four feet beneath a pair of skimpy black pants. Putting a bird on the bonnet is one thing… putting a bird on the roof, now that’s got style.

There’s an awful lot of Landy fans who’d never, but never countenance something as vulgar as a picture of a semi-clad girl on their vehicle. Mind you, there’s an awful lot of Landy fans who’d never countenance anything as vulgar as a non-standard paint code or rim style, and at least he’s got the latter covered off as his hairy great Insas ride on genuine SVX alloys. So rest easy – each to their own, and all that, and you’ve got to admit that being on the roof of one of the tallest vehicles around, she’s not exactly in your face. Unless Andy fails a hill so steep he sits the truck on the back of that 3M cage, obviously – but if this happens, even a naked midriff, however nice a naked midriff it might be, is unlikely to distract anyone’s attention from the wheel-waving going on nearby.

And talking of that kind of hill, what’s Andy’s verdict on 13 years of Land Rover ownership? Unsurprisingly, it’s a positive one. ‘To be able to drive up and down hills you can’t walk is amazing. I still love my Landy – it’s a truly incredible piece of kit.’ Looks like missy’s midriff is going to be stretched across the roof of this here 90 for a while yet…